He also dated Michelle Wright from whom they have a son Raelondo. Their relationship also didn’t last long. Wright sued him for child support.

He was previously in a relationship with Chericca Adams. From this relation, he has a son named Chancellor Lee Adams who was born with cerebral palsy and permanent brain damage.

There was an incident when Adams refused to abort the baby he hired a person to murder her. During her eight months’ pregnancy, she was shot four times in 1999.

She, fortunately, delivered a baby through emergency cesarean section and passed away on December 14, 1999. Rae was also charged with murder. 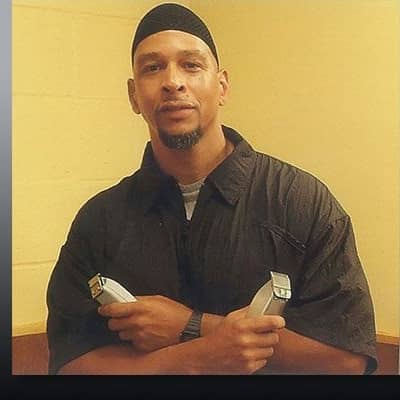 Who is Rae Carruth?

Rae Carruth has also been drafted in the first round of the 1997 NFL Draft by the Colorado Panthers of the National Football League.

He has also been in prison for 18 to 24 years for being guilty of conspiring to murder his then-girlfriend Cherica Adams who was also pregnant with his child.

Rae Lamar Wiggins was born on 20 January 1974 in Sacramento, California, US. Carruth holds the American nationality and believes in the Christian religion.

He studied at Valley High School and got a scholarship for football at the University of Colorado Boulder.

In his college life, he played four seasons for the Buffaloes and was also named First Team All-American in 1996. He also earned his degree with a double major in English.

Carruth began his career in the NFL Draft in 1997. The Carolina Panthers selected him in the first round and 27th overall. He also agreed to terms with the Panthers on a four-year contract.

He also appeared in 14 games as a rookie. Carruth had four touchdown throws and 44 receptions. He was later chosen to the wide receiver’s all-rookie team.

In 1998, he was unfortunately injured and missed the full season. He appeared in his first six games of the 1999 season. At the end of the season, he had 14 grabs for 200 yards.

He was suspended from the Panthers when he was charged with murder. In December 1999, he was also dismissed by the NFL.

Now Rae has received First Team All-Big 12 in 1996. He has won the Pro Football Writers Association All-Rookie Team in 1997.

As of 2022, Rae currently estimated whole net worth is $20 thousand. If he had not been in any cases and lived a normal career his net worth would be probably high.

But as he got suspended by NFL and served 18 years of prison his salary and income is probably low than other celebrity.

Carruth was convicted guilty of conspiring to murder his then-girlfriend, firing into an occupied vehicle, and destroying an unborn child with an instrument.

He was judged not guilty of first-degree murder and was not sentenced to death. He received a sentence of 18 to 24 years in jail.

He has not shared his body measurement however looking at his appearance he has black eyes and d bald head.

He is wearing a black hat or scarf on his head. He also has not shared his dress and shoe sizes.

He is not active on social networking sites. He has always been offline and private about his personal life.