Raina Telgemeier is an American cartoonist. She was married to Dave.

Raina Telgemeier was a married woman. She wedded Dave Roman in 2006. But, the marriage didn’t last long so they got separated in 2015.

She is at present possibly single. 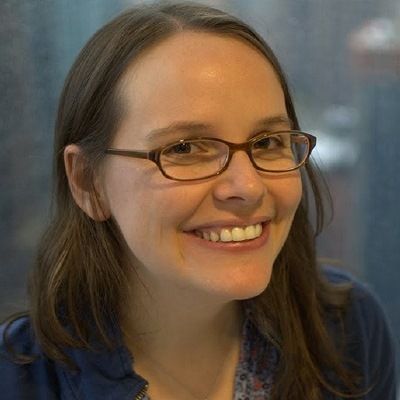 “Weird...something happens when you smile at people. They smile back”

“But the more I focused on my interests, the more it brought out things I liked about myself”

Who is Raina Telgemeier?

Similarly, she is also famous for writing the graphic fiction novel titled ‘Drama’. Her other popular works include graphic novel adaptations of ‘The Babysitters Club’ series, ‘Take-Out’, and ‘X‑Men: Misfits’.

Raina Telgemeier was born in San Francisco, California, the United States on May 26, 1977. She is currently 43 years old. Her (father’s and mother’s name is unknown).

Unfortunately, there is no information about her father and mother.

Later, she attended the School Of Visual Arts.

Talking about her profession, Raina Telgemeier began attending small-press festivals such as the MoCCA Festival, selling self-published autobiographical stories and vignettes from her life.

Similarly, she produced seven mini-comics issues in the Take-Out series between 2002 and 2005. Each was a twelve-page black-and-white comic. Other early works include a short story in Bizarro World for DC Comics and a short story in Volume 4 of the Flight anthology.

In the year 2004, Telgemeier met an editor from Scholastic at an art gallery party who mentioned that Scholastic was planning to set up a graphic novel imprint (which later became Graphix). Likewise, at that year’s San Diego Comic-Con, Telgemeier met that editor’s boss, who invited her to pitch an idea for Scholastic.

Whereas, Scholastic/Graphix went on to publish four graphic novels in the series: Kristy’s Great Idea, The Truth About Stacey, Mary Anne Saves the Day, and Claudia and Mean Janine. In fact, the advances for the adaptations allowed Telgemeier to quit her full-time job and concentrate on her art, and she completed the fourth novel in 2008.

By the time she had completed work on the Babysitters Club adaptations in 2008, she had developed a substantial amount of Smile and received encouragement from Scholastic to continue work. In 2009, Del Rey Manga released X-Men: Misfits, which Telgemeier co-authored with her then-husband, Dave Roman.

Likewise, in 2010, Telgemeier released Smile, which reached The New York Times bestseller list in 2011 and remained on the list for over 220 weeks. In September 2012, her graphic novel Drama about a middle school stage crew and performers was released.

Basically, the novel was fictional, it drew on experiences from Telgemeier’s experience in middle school and high school theater. In August 2014, her second autobiographical graphic novel, Sisters, about her life growing up with her younger sister, was released.

Telgemeier has also published stories in Nursery Rhyme Comics (2011, First Second) and Fairy Tale Comics (2013, First Second); the Explorer graphic novel series (2012, 2013, Abrams/Amulet); and Comics Squad: Recess! (2014, Random House). In September 2016, Ghosts was released, which is about a girl and her family moving to a new town. Therefore, Telgemeier stated she had been developing Ghosts since 2002.

Telgemeier got suffered from a serious mouth injury due to which she had to undergo several years of dental and orthodontic surgeries. Due to her injury, she was viciously teased by some of her friends and this made her seek solace in drawing.

Talking about her awards, a nomination she won Eisner Award.

Carmen has an estimated net worth of around $1 million- $10 million and she has earned that sum of money from her professional career.

Raina Telgemeier has a height of 5 feet 3 inches and her weight is unknown. Her hair color is brown and her eyes color is blue. Furthermore, her dress size is 4 (US) and her shoe size is 8 (US).

Also get to know more about Nina Paley, and Jake Tapper.