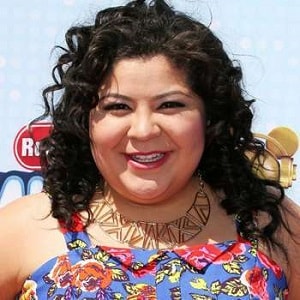 “There are different types of bullying

one of the biggest ones out there right now is cyberbullying. I had the privilege of filming an 'Austin &

Ally' episode centered on cyberbullying, how it can get out of control, the ups and downs that you feel, and how to deal with it.”

What is the relationship of Raini Rodriguez?

Raini Rodriguez is currently single. Previously, she was in a relationship with an American actor, William Brent.

The duo began dating on December 1, 2013, but could not their relationship forward and ended after fifteen days. She is recently focusing on her career and she might be searching for the perfect one.

Who is Raini Rodriguez?

Raini Rodriguez is an American actress and singer.  The talented actress is well known for her role a Trish in the Disney series called ‘Austin & Ally’. She is also well recognized for his role as Maya Blart in the film ‘Paul Blart Cop’.

She was born on July 1, 1993, in Bryan, Texas, USA. She is currently 28 years old. Her father’s name was Roy Rodriguez and her mother’s name is Diane Rodriguez.

Her father owned a business called Rodriguez Tire Service. She has got three siblings: Rico(actor), Ray, and Roy Jr. Her father died on March 12, 2017, at the age of 52.

She is a huge fan of horror movies and is afraid of heights. Raini holds American citizenship and her ethnicity is a mix of Hispanic/Mexican.

Talking about her education, she was homeschooled with her brother. She studied under booking coach Amy Lyndon.

Raini was discovered by a talent agency based in California at IMTA showcase, Susan Osser for her natural charm and talent. At that time, Raini was only 11 years old. Osser encouraged her mother that she will be working as Raini’s manager. Then, Raini along with her mother and brother(Rico) moved to California to grab opportunities for her career but her father stayed in Texas to run the business.

The 25 years old actress debuted her career in 2006 after she made her appearance on the television series ‘Huff’ in which she portrayed the role of Denise. Her performance received positive reviews from the critics and began appearing on different television series like ‘Family of the Year’, ‘Growing Up and Down’, ‘Mutt & Stuff’, etc.

She has an estimated net worth of around $2 million as of 2022, and she has earned that sum of money from her different professions.

There is a rumor that she is dating her co-star from the Disney TV series ‘Austin & Ally’, Calum Worth since 2012, but neither of them has confirmed the rumor.