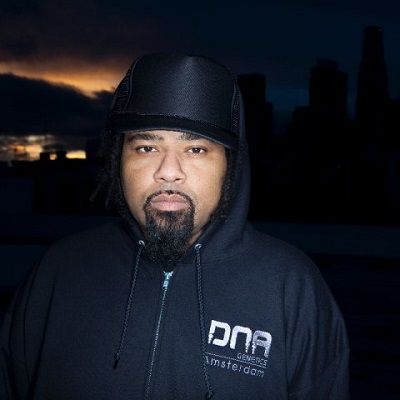 He is passionate about his work. Apart from that, he loves all animals.

Who is Rakaa Taylor?

Rakaa Taylor is an American rapper and songwriter. Rakaa is renown as a member of the band, Dilated Peoples.

His stage name is Rakaa Iriscience.

Currently, he is the Marketing Director of DNA Genetics, California.

Rakaa Taylor was born in Los Angeles and raised in South Central. He is of English- Irish -Korean ancestry.

He has a brother.

His mother is a Korean war victim. She was adopted by a family in California. The family was associated with the church as a choir director.

His father is the son of a preacher in the church. His parents first met in the same church.

Taylor attended Santa Monica College in Santa Monica, California. In 2007, he joined the Academy of Art University in San Francisco and got graduated in  2012 with Honors in Fine Arts, Advertising.

-1997, joined the American group, Dilated Peoples as a member.

-2006, joined IT consultancy, Red Rock Reef as the senior consultant.

-2012, he became the senior director/ strategist for the company,  Cartel Creative, Seoul, South Korea. He helped to drive $15M in revenue for a full-service, coordinated to make a strategy for the R16 Urban Arts Festival with the Korean Tourism Organization and nd Ministry of Culture, Sports & Tourism.

-2017, left the organizations; The Empire Agency, and Cartel Creative, Inc.

Taylor started his career as a Co-Writer and Co-Lead vocalist for the American Hip-pop group, Dilated Peoples. In 1997, the band released the album, Third Degree.

In 2010, he released his solo debut album, Crown of Thorns. The album peaked at #72 positions in Billboard. The album was featured by artists including Aloe Blacc, KRS-One, Chali 2na, and Fashawn. Some of his singles along with the year is-

He has an estimated net worth of $1.5 million US. His salary as a rapper is $67k US. As a senior consultant, his average salary is $96k US. As a marketing director, Rakaa earns $81k US on average.

Apart from that, he earns through the albums for his guest appearances.