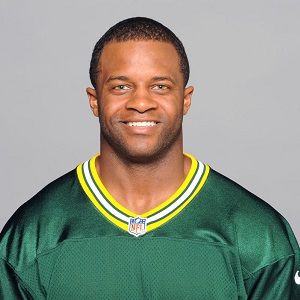 Randall Cobb is a married man. He is married to his longtime girlfriend, Aiyda Ghahramani. The couple tied the knot on 15 April 2017. Their wedding was at Shay & Ivy. Their close family members and friends were present at their wedding.

Randall has currently owned an apartment in Maryville, Tennesse.

Who is Randall Cobb?

Randall Cobb is an American football wide receiver for the Green Bay Packers of the National Football League(NFL). He played college football at Kentucky. Cobb was drafted by the Packers in the second round of the 2011 NFL Draft.

Randall was born on August 22, 1990, in Maryville, Tennessee. His nationality is American and ethnicity is Afro-American.

His birth name is Randall Ladonald Cobb II. He was born to Randall Cobb Sr.(father) and Tina Cobb(mother). He has a brother, Michael Love and a sister whose name is unknown.

His father worked at the Denso car parts factory in Maryville, Tennessee and also worked side jobs in the evenings, ranging from installing ceramic tile floors to mowing lawns and plowing snow, with young Randall II helping. His mother was a track star in high school, later worked at Denso, where she met Randall Sr.

Cobb attended his high school  Alcoa High School in Alcoa, Tennessee, where he was a letterman in football, basketball, and track.

Randall attended his college in the University of Kentucky where he played college football. While at Kentucky, he specialized in Community Communications and leadership Development.

Cobb was drafted the second round (64th overall) of the 2011 NFL Draft by the Green Bay packers. On September 8, 2011, in the packers’ opening game of the season against the New Orleans Saints, Randall became the first person born in the 1990s to play in the NFL.

Cobb recorded his NFL touchdown on a 32-yard reception in the first quarter and followed up with a 108-yard kickoff return in the third quarter that tied the record set by Ellis Hobbs of the New England Patriots in 2007 for the longest kickoff return in NFL history. The return was later named a player of the Year at the season-ending NFL Honors banquet.

On September 16, 2016, Cobb was fined $9,115 for pulling the face mask of linebacker Paul Posluszny in Week 1 against the Jacksonville Jaguars. Randall finished the season with receptions on 84 targets for 610 yards and four touchdowns.

Randall Cobb: Salary and Net Worth

He has a net worth of $4 million a but his salary is not revealed yet.

There was a rumor that Green Bay Packers NFL in 2015 that Packers Resign WR Randall Cobb which was just rumor and nothing more than that.

Aaron Rodgers Partied with all might At Randall Cobb’s Wedding!! All information here!