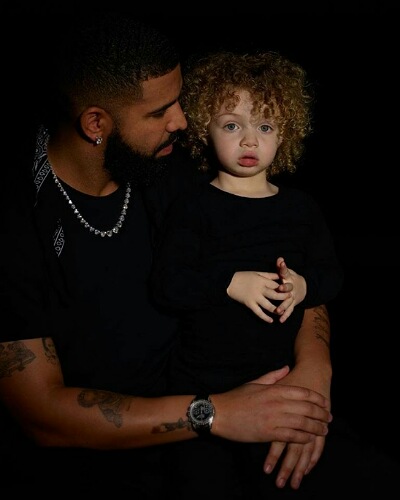 After keeping him from the public eye, Drake has ultimately revealed his photo to the world on his Instagram. Drake posted 6 different photos and one was with his ex-girlfriend Sophie.

The child is extremely cute with an adorable look and eyes and blond curly hair.

Drake put up an emotional message for his 64.5 million fans. He urged his fans to connect to their inner light. He praised his son and added that he misses him immensely.

At the end of the past, Drake wrote:

“I love and miss my beautiful family and friends and I can’t wait for the joyful day when we are all able to reunite.

“Until then please keep your lights on.”

The rapper and Sophie met in January 2017. The two started dating and were in Amsterdam having dinner together. Sophie got pregnant with his baby almost immediately. She delivered the child on 11 October 2017.

But earlier in May 2017, Sophie had disclosed to TMZ that Drake is texting her to abort the baby. Drake did not think that the baby was his. His rep had said:

“If it is, in fact, Drake’s child, which he does not believe, he would do the right thing by the child.”

Therefore, the musician asked for a paternity test which proved his fatherhood. But he kept it a secret until rapper Pusha T spilled the beans in a diss track. It was, in June 2018 that the rapper accepted in public that he was, the father of Sophie’s son.

“I wasn’t hidin’ my kid from the world/I was hidin’ the world from my kid.”

The rapper has been quite open about his rocky relationship with Sophie. But he said on a show:

“no matter what happens, I have unconditional love for the mother of my child because I want him to love his mother and I have to project that energy.”

Throwing more light on it, Drake had rapped:

“She’s not my lover like Billie Jean but the kid is mine/ Sandi used to tell me all it takes it one time, and all it took was one time/ S***, we only met two times, two times.

“I used to challenge my parents on every album/ Now I’m embarrassed to tell them I ended up as a co-parent/ Always promised the family unit/ I wanted it to be different because I’ve been through it.”

Drake is a Canadian songwriter, rapper, singer, record producer, and actor. Similarly, he is also known as Aubrey Drake Graham, Aub, Aubrey Graham, Aubrey. Firstly, he was recognized as an actor in the teen drama television series Degrassi: The Next Generation.

During 2007, he released his debut mixtape, Room for Improvement. Furthermore, he has released two independent projects ‘Comeback Season’ and ‘So Far Gone’. More info…