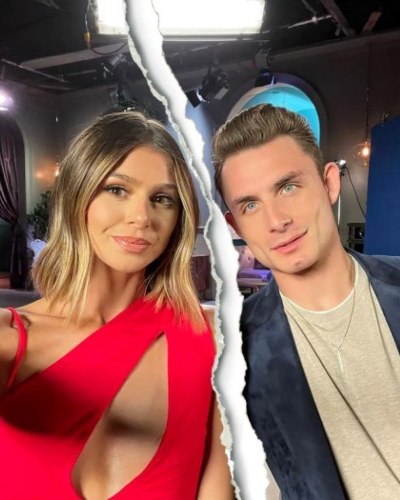 Raquel Leviss and James Kennedy have officially split! They made their breakup public on 5th December 2021 a week after the separation actually happened. Their split is going to be featured on the Vanderpump Rules season 9 reunion. On 3rd December, they were spotted filming the reunion and it is known that Raquel is going to return the engagement ring on camera.

“After these 5 wonderful years we had together, we decided we have two different goals and made the decision to call off the engagement. We love each other very much, but we aren’t in love anymore. We want nothing but the best for each other so please keep any thoughts positive. Sending Love.”

But both of them have turned off the comment section to avoid negativity and criticism from their followers. They dated for almost five years before getting engaged in a Coachella-themed proposal in May this year. But sadly, their engagement did not work out ending in a breakup. They have a dog Graham Cracker but it is not known who is going to take care of the dog.

Even though they have split they have not unfollowed each other nor have deleted any pictures. Lisa Vanderpump shared her views regarding their separation,

“[Leviss is] the best thing that ever happened to him. But you really do see Raquel kind of blossoming, blooming. … You see her really having a voice. She was very much, like, a deer caught in the headlights before, but now she’s, like, actually kind of really comes out of a shell.”

Also read James Kennedy engaged to his lover Raquel Leviss! All about the Coachella themed proposal

Raquel Leviss is an American model, beauty pageant contestant, and TV show star. She formerly held the title of Miss Sonoma County and also competed in the Miss California pageant. She made appearances in Vanderpump Rules and also gained more after her relationship with the DJ, James Kennedy. Read more bio…