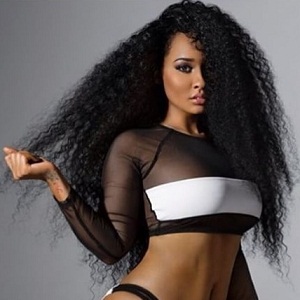 Rasheeda is a married woman. She is married to Kirk Frost. The couple tied the knot in the year 1999. Her husband is a singer-songwriter and rapper.

However, they filed for separation at one time. But they sorted things out and got back together.

Rasheeda is an American rapper, fashion designer, television personality, and businesswoman. She was a member of the teenage hip-hop trio Da Kaperz until 2000 when she launched her solo career.

Her fifth album, Certified Hot Chick, was released on August 18, 2009. She was also a part of the hip-hop/R&B duo Peach Candy with R&B singer-songwriter Kandi Burruss.

She was born on 25 May 1982, in Atlanta, Georgia, the United States of America. Her nationality is American and her ethnicity is All-American.

Moreover, her birth name is Rasheeda Buckner-Frost (née Buckner). Her mother’s name is Shirleen Harvell and her father’s name is unknown. There is no information on her siblings.

Other than this, nothing much info is known about her. This includes info on her educational background.

Rasheeda started her career as an adolescent. She and two of her friends formed the hip-hop girl group Da Kaper and were signed with recording label D-Lo Entertainment, with whom she continues to work. A year later, she began her career as a solo artist.

On March 27, 2001, she released her album Dirty South, through D-Lo & Motown Records. The album featured guest appearances from Pastor Troy, Thugz Nation, Nelly & Re-Re. The album achieved some notoriety, due to the success of her first single “Do It”. Dirty South would place Rasheeda firmly in the southern hip-hop genre.

Rasheeda further refined her sound with her second album, 2002’s A Ghetto Dream, an independent release under her label D-Lo after leaving Motown Records. A Ghetto Dream features faster rhythms, bolder beats, and assistance from Lil’ Jon and the Eastside Boyz. In 2004, Rasheeda was featured on Petey Pablo’s single “Vibrate” & Nivea’s single “You Like It Like That”.

On April 25, 2006, Rasheeda released her third album, GA Peach. The album is known for her paying homage to her southern hip-hop roots, and rapping more intimate lyrics combined with a slightly slower rhythm. Rasheeda was featured on Nivea’s Complicated.

On June 19, 2007, Rasheeda released her fourth album, Dat Type of Gurl. The album gained much success due to the success of her first single from the album “Got That Good (My Bubble Gum)”, originally featured on GA Peach. Rasheeda reprised some of her earlier works from GA Peach, and many of her old tracks were updated with remixes and samples.

In 2007, Rasheeda was featured on Mims’s single “Like This“. Also in 2007 Rasheeda & singer/writer/reality star Kandi Burruss created a group called Peach Candy, but the group would later disband due to both artist’s busy schedules.

On June 18, 2012, she released her sixth album Boss Chick Music which was released through Google Play and her label D-Lo Entertainment and promoted on the tenth season of Bad Girls Club: Atlanta and Love & Hip Hop: Atlanta.

Her first single from the album was entitled “Marry Me”. Rasheeda’s second single was “Legs To The Moon“. Both of them were followed by a music video. In 2013, during the second season of Love & Hip Hop: Atlanta, Rasheeda shot a music video for “Hit It From The Back”.

In 2015, Rasheeda released a new song on the 4th season of Love & Hip Hop: Atlanta titled, “I Meant It” reporting that the album for the song could be her final release. The same year, she landed a guest role, with the character’s name of Scrumptious, on the 3rd episode of Fox’s Rosewood.

In 2012, Rasheeda landed a spot along with her husband/manager Kirk Frost on VH1’s Love & Hip Hop: Atlanta.

Rasheeda has a net worth of $600 k but there is no information about her salary. She now has her own makeup line, Poiz Cosmetics, and an apparel and accessory website, Imbossy.com

There were rumors that her husband Kirk Frost cheated on her, But she denied this news.

This rapper has a black hair color and has black eye color. There is no information about her height, body weight, and shoe size.

Kirk Frost and Rasheeda filed for divorce but they are back together for various reasons: children, mother, birthday…