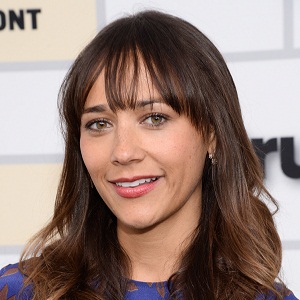 Smiling is definitely one of the best beauty remedies. If you have a good sense of humor and a good approach to life, that's beautiful

I know that in life there will be sickness, devastation, disappointments, heartache - it's a given. What's not a given is the way you choose to get through it all. If you look hard enough, you can always find the bright side

I think every girl has that a guy she has trouble letting go of.

Who is Rashida Jones?

Jones was born in Los Angeles, California on February 25, 1976. Her nationality is American and ethnicity is mixed(African-American and Welsh)

Her birth name is Rashida Leah Jones. Her mother is an actress and her father is a musician/record producer. She has one sibling and five half-siblings from their father’s other relationship. Jones and her sister were raised in Reform Judaism by their mother.

Her father recalled how he would often find the six-year-old Jones under the covers after bedtime, reading five books at a time with a flashlight. Jones had the ability to play classical piano from a young age. Jones attended The Buckley School in Sherman Oaks, California. She was involved with theater at Buckley, with tutelage from acting teacher Tim Hillman. Later at the age of 14 Jones parent got divorced and she moved with her mother to Brentwood. Jones began practicing Hinduism in her early teens with her mother, later they visited an ashram in India.


At the beginning of her studies, she attended Hebrew School. She went to Harvard University for her further studies and was a resident of both Currier House and Eliot House. Initially, she was interested in becoming a lawyer. Jones performed in For Colored Girls Who Have Considered Suicide / When the Rainbow Is Enuf in her second year of college. Jones graduated in 1997 with regional and philosophy.

Jones debuted in a 1997 miniseries The Last Don. Myth America, East of A and If These Walls Could Talk 2 was her another appearance in the same year. She did the role of Louisa Fenn on Boston Public, later she guest starred in Freaks and Geeks. She also earned an NAACP Image Award nomination in 2002 she also worked in many movies like Full Frontal, Death of a Dynasty, Little Black Book.

Jones once considered to leave her profession and continue to study graduation in public policy, later she was offered the part on 24 episodes of The Office.In 2010 she did the movie Cop Out, The Social Network, Monogamy. Next year she did The Big Year, Friends with Benefits, Our Idiot Brother, and The Muppets. She also did Television shows like Web Therapy, Parks, and Recreation, The Simpsons.

Currently, she is involved in Angie Tribeca as the lead role in the show. Her movie Toy Story 4 is to be released in 2019. Jones has also worked for a nonprofit organization that teaches children to resolve conflict without violence. Jones has campaigned in the last three cycles for Democratic Party presidential candidates Barack Obama during the 2008 and 2012.

It is rumored that The Wasp won’t be a part of Ant-Man, but she alter ego Janet Van Dyne will, and the actress at the top of their list to play her is Parks & Recreation’s, Rashida Jones.

Rashida Jones has a height of 5 feet 4 inches. Her body weighs 58kg. She has dark brown hair and hazel eyes. Furthermore, her body measurements are 36-25-34 inches. Her bra size is 34B, dress size is 8 US and shoe size is 7 US.