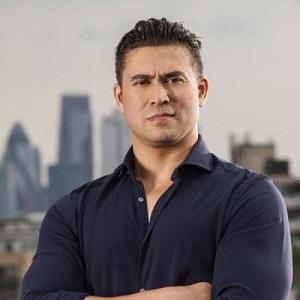 Rav Wilding was previously in a relationship of 4 months with Chantelle Houghton. The pair broke up after a furious and public row. Rav tweeted that he had ‘drawn a line’ under the relationship after the argument in London’s Richmond Park. This left the former Big Brother star Chantelle in floods of tears.

Next, he was involved in a relationship with celebrity producer of ‘Loose Women’, Jill Morgan. After seven months of dating, the couple is now engaged. Jill revealed the good news on her Twitter page. He does not have children from any of his relationships.

Who is Rav Wilding?

Rav Wilding is a British television presenter. Previously, he worked as a security guard at Harrods. Additionally, he has also worked as a soldier, police officer, and a presenter during his career.

Rav was born in Canterbury, Kent, England on 16 October 1977 as the second of five children born to a Mauritian father and an English mother who were both nurses. He did not have a stable childhood as after a family breakup, he had to leave home at a young age. Next, he joined the British Army at the age of seventeen. He is of British nationality. Furthermore, he belongs to a mixed ethnic background of Mauritian and English.

Talking about his education, Rav attended Fulston Manor School in Sittingbourne, Kent. After completing his secondary school, he took an apprenticeship in construction before joining the British Army.

Initially, in his career, Rav completed an apprenticeship in dry lining. Furthermore, he was the first in the UK to complete the qualification. Next, he opted to join the military at the age of 17. He successfully served in the 5th airborne brigade in the specialist air defense unit ‘P-Troop’. It is an elite unit within the British army often referred to as a ‘feeder unit’ to the Special Forces. Later, he was forced to leave the Army after only 4 years due to a serious leg break.

Next, Rav started working at Harrods in Knightsbridge as part of the security team. His application to join the Metropolitan Police Service was accepted after working nine months at Harrods. He joined the Service at the start of 2000. He was posted to Peckham in South London. Then, he became a contestant on a new television program on Channel 4 called ‘Eden’. He returned from the program after three months in the jungle. He then worked in the CID and was posted to units focusing on robbery, burglary and major investigations.

Furthermore, BBC offered Rav a part on ‘Crimewatch’. He then resigned from the police force in February 2008 to concentrate on TV work. He has appeared in other numerous television shows and documentaries including ‘Neighbourhood Blues’, ‘Christmas City’, ‘Christmas City’, ‘Mysteries at the Museum’,’ National Lottery Stars 2016’, ‘Crimewatch Roadshow’, ‘The Saturday Show’, ‘Strictly Come Dancing: It Takes Two’, ‘Daily Brunch with Ocado’ among others.

Rav has not revealed his current salary. However, he has an estimated total net worth of around $ 1 million currently.

Rav’s break-up with Chantelle Houghton attracted a fair amount of controversies. The break-up happened following a furious row during a picnic in London’s Richmond Park. Also, Chantelle accused him of using steroids.

In addition, his feud with Toneeta Beckford also caught the media attention for a while. Furthermore, there was a rumor that Rav might have been seriously injured which later turned out to be true.

He was injured while training and underwent surgery after snapping hamstring tendons in his left leg. There is also another rumor going on that suggests that Rav is planning on suing makers of ‘Splash!’.

Talking about his body measurement, Rav has a height of 6 feet 0½ inches (1.84 m). Additionally, his hair color and eye color is dark brown. There is no information about his shoe size and dress size.

Rav Wilding’s Journey From A Police Officer To The Television Presenter; More Details About His Injury And Personal Life