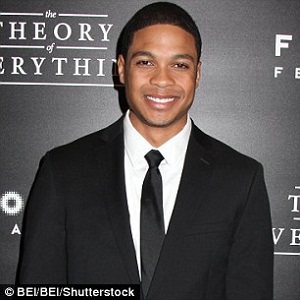 I actually grew up watching a lot of these cartoons - a lot of the animated series. 'Batman: The Animated Series,' 'Justice League,' all the stuff that would come onto Cartoon Network

My first encounter with Cyborg was through the 'Teen Titans' cartoon

I love the levels, the depth, that the character has. He is the only member of the Justice League who cannot take off his costume. He is Cyborg 24/7.

What is the relationship of Ray Fisher?

This is due to the fact that he has managed to keep his personal life a secret, away from the media. Said so, he may be enjoying a single life or may have been in a relationship with someone, at present.

Who is Ray Fisher?

Ray Fisher is an American stage actor. He is best known for his role in The Good, the Bad, and the Confused.

Fisher was discovered after playing Muhammad Ali in Fetch Clay, Make Man in 2013.

He is also known for his big-screen debut playing Victor Stone/Cyborg in DCEU.

Ray Fisher was born on 8th September 1987, in Baltimore, Maryland, United States. He grew up in Lawnside, New Jersey.

Other than his presumed year of birth, country of birth, and place of upbringing, the mainstream media has not much information regarding the life of Ray Fisher.

This includes the info on the whereabouts of his parents, siblings, early childhood and teenage days, etc.

Fisher attended Haddon Heights High School. It was there that his high school English teacher introduced him to the theater.

He was active in the school’s theater and choir program. Fisher also sang in his church’s choir. After high school, Fisher attended the American Musical and Dramatic Academy in New York.

Since 2008, Fisher has performed with Shakespeare Theatre of New Jersey. This also includes a starring role as Tom Robinson in the theater’s production of To Kill a Mockingbird.

In 2009, he acted in William Shakespeare’s play, “Macbeth,” at the Shakespeare Theatre of New Jersey in Madison, New Jersey at Drew University.

In 2015, Fisher played the role of Captain Edward Dwight in the episode- “In the Blind” of the TV series The Astronaut Wives Club. This is the only known TV role to date.

In 2016, he portrayed the superhero Victor Stone/Cyborg in the DCEU film Batman v Superman: Dawn of Justice. Fisher will reprise his role in Justice League and its sequel and has a contract to appear as the character in other films as well.

This includes the character’s own solo movie Cyborg in 2020, and an appearance in another DCEU solo flick The Flash.

Apart from that, he also appeared in the short movie The Good, the Bad, and the Confused. in 2008.

There are not many significant rumors and controversies regarding Ray Fisher in the mainstream media to date. he has thus far, managed to keep his image clean in the eyes of the general public.

He has black hair color and his eye color is dark brown. There is no information about his shoe size.

Also get to know more about the birth facts, education, career, net worth, rumors, height, and social media of different personalities like Ron Livingston, Dean Geyer, and Scott Cohen.