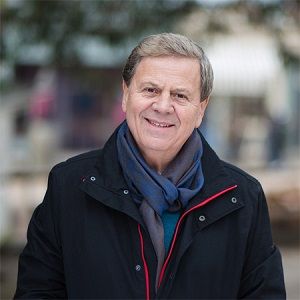 I've done more than 10,000 interviews, and I've learnt that you've got to do your homework. I bury myself in research beforehand. And you have to be genuinely interested in people

there's a cornucopia of great, ordinary people out there with wonderful, colourful stories.

Women are the more important members of relationships. Women are the survivors, the nurturers and the bosses, despite men pretending it's a male dominated society.

Ray Martin is a married man he married his girlfriend Dianne Martin in a private marriage ceremony.

He has been in long-married relations with his current wife and has two children, a daughter named Jenna Martin and a son named Luke Martin.

Who is Ray Martin?

Ray Martin is an Australian television journalist and entertainment personality. He is well known for his various on-air roles on Channel Nine from 1978, particular his long tenure as host of the variety/talk show The Midday Show.

During 2011 he also returned to Current Affairs 60 Minutes, in which he had been an original presenter, albeit only in a part-time capacity.

Ray was born in Richmond, New South Wales, Australia on December 20, 1944, to George Grace. His mother’s name is unknown. He is the only son among his parent’s four children and is the youngest.

Additionally, there is no information regarding his siblings. He belongs to Australian nationality and English ethnicity. His birth sign is Sagittarius.

Talking about his education, he attended  Launceston College and the University of Sydney. Besides that, he graduated with a Bachelor of Arts.

On talking about his profession, Ray Martin started his broadcasting career working for Australian Broadcasting Corporation (ABC) as a cadet in Sydney in 1965. During his ten year career, he also presented several stories like anti-Vietnam War protests, presidential elections, the Olympic Games, and several current news affairs and news.

Then, he moved to the Nine Network and worked along with the reporters Ian Leslie and George Negus to launch 60 minutes. During 1985, he also presented show Midday with Ray Martin and hosted top-rating specials. Whereas, he has also interviewed the superstars Nicole Kidman, Robin Williams, Tom Cruise, and Russell Crowe. Besides that, he also hosted series – Our Century, The Great Debates, and Simply the Best.

Likewise, in 2005, he was made Nine Network’s Senior Reporter and he covered sports events like World Cup Cricket and Commonwealth Games. Unfortunately, he was replaced by Tracy Grimshaw on A Current Affair in 2006. In addition, he also replaced Ross Greenwood in September 2007. During  2008, he left Nine Network due to the time slot and differences with management over budget.

After his Nine Network career, he also led the official broadcast of the World Youth Day.  During 2014, he also joined the SBS series and started working as the presenter of First Contact. Therefore, he was also featured in the SBS Australian version of the popular international documentary Who Do You Think You Are?.

On talking about his lifetime achievements and awards, he won Gold Logie Award for his role on Midday and A Current Affair.

Ray Martin’s hair color is grey and his eye color is dark brown. In addition, his height, weight, and shoe sizes, etc are disclosed.