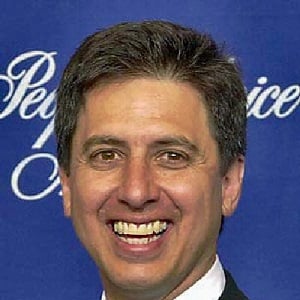 Everyone should have kids. They are the greatest joy in the world. But they are also terrorists. You'll realize this as soon as they're born, and they start using sleep deprivation to break you.

It seems to be a common denominator with a lot of comics, this low self-esteem thing.

Right after 'Raymond' I had a world-is-my-oyster attitude, but I found out I don't like oysters. I had this existential emptiness.'What is my purpose? Who am I?' I had a big identity crisis.

Having children is like living in a frat house–nobody sleeps, everything’s broken and there’s a lot of throwing up.

If my father had hugged me even once, I'd be an accountant right now.

What is the relationship of Ray Romano?

Ray Romano is a married man. He is married to Anna Romano. They met while working at a bank together. The pair later married on 11 October 1987.

They have four children together, Alexandra Romano, Matthew Romano, Gregory Romano, and Joseph Romano. Romano’s marriage is going strong as there is no news regarding any extramarital affairs at present.

Who is Ray Romano?

Ray Romano is an American stand-up comedian and actor.

People mostly know him for his role in the sitcom ‘Everybody Loves Raymond’.

Romano was born as Raymond Albert Romano in Queens, New York City, New York on December 21, 1957. He was born to parents Lucie and Albert Romano. His father was a real estate agent and engineer whereas his mother was a piano teacher. He is 61 years old.

Throughout his childhood years, he grew up in the Forest Hills neighborhood of Queens. Additionally, he has an older brother, Richard and a younger brother, Robert.

He developed a keen interest in comedy as a child. He is of American nationality. Furthermore, he belongs to a mixed ethnic background of Italian and French.

Talking about his education, Romano attended Our Lady Queen of Martyrs for his elementary and middle school education.

He had a big break after appearing on ‘Late Show with David Letterman’. Soon, he became the star of his own show, ‘Everybody Loves Raymond’. In 1997, he played Ray Barone in the TV series ‘Cosby’.

Some other movies and television series that Romano has appeared in are ‘Get Shorty’, ‘Kevin Can Wait’, ‘Vinyl’, ‘The Adventures of Mr. Clown’, ‘Parenthood’, ‘Maron’, ‘Rob the Mob’, ‘The Middle’, ‘Men of a Certain Age’, ‘The Office’, ‘The Last Word’, and ‘Welcome to Mooseport’ among others.

Romano has garnered two Golden Globe Award nominations. Additionally, he has won the Primetime Emmy Award a total of three times in his career. Furthermore, he has also won the American Comedy Award and CableACE Award.

Romano’s current salary is around $1.7 million per annum. However, he has an estimated net worth of around $130 million at present.

Romano’s show ‘Everybody Loves Raymond’ has been part of several controversies over the years.

Additionally, he weighs around 80 kg. Furthermore, his hair color and eye color is dark brown.

Ray is not active on social media.