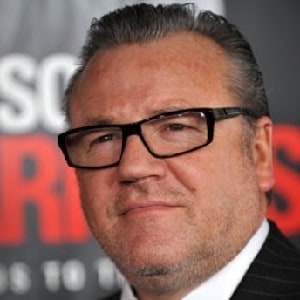 All the great Shakespeare plays are about killing. Alas, poor Yorick, that's about death. And in Romeo and Juliet everyone up ends up dying. The greatest dramas in the world are all about sex, violence and death.

I'm not a successful Hollywood actor. The Hollywood stuff hasn't come out yet. It might come out and I might be shit.

Unless it's your business or something, bankrupt just means you can't have a bank account.

If you can get in a ring with 2000 people watching and be smacked around by another guy, then walking onstage isn't hard.

Ray Winstone is a married man. He is married to Elaine Winstone. They met in 1979 while filming ‘That Summer’. The pair later married in the same year. They have three daughters from this marriage, Jaime Winstone, Lois Winstone, and Ellie Rae Winstone. Lois and Jaime, are both actresses. Winstone’s marriage is going strong as there is no news regarding any extramarital affairs at present.

Who is Ray Winstone?

Ray Winstone is an English actor, producer, writer, musician, and director. People mostly know him for his role as Carlin in the 1979 film ‘Scum’. Additionally, he also played Kevin in ‘Quadrophenia’ and Will Scarlet in the television series ‘Robin of Sherwood’.

Winstone was born as Raymond Andrew Winstone in Homerton, London on February 19, 1957. He was born to parents Raymond J. Winstone and Margaret. His mother had a job emptying fruit machines and his father ran a fruit and vegetable business. Since his father took him to the cinema every Wednesday afternoon, he developed a keen interest in acting since his childhood years. He is of English and British nationality. Furthermore, he belongs to the English ethnic background.

Winstone landed his first major role in ‘What a Crazy World’ at the Theatre Royal. In 1975, he appeared in the TV series ‘You and the World’. Additionally, he portrayed the role of Smith in an episode of the TV series ‘Plays for Britain’. He played 2nd Youth in an episode of ‘The Sweeney’ in 1976. His major role came in 1977 when he was cast as Carlin in the TV movie ‘Scum’. This was later made into a feature film of the same name which was released in 1979. In the same year, he also appeared in ‘Quadrophenia’ and ‘That Summer!’. Since then, he has appeared in numerous other movies and television series. Furthermore, he has also produced several movies and television series. All in all, he has over 130 credits as an actor.

Some other movies and television series that Winstone has appeared in are ‘King of Thieves’, ‘Ice’, ‘Jawbone’, ‘Of Kings and Prophets’, ‘The Nightmare Worlds of H.G. Wells’, ‘Point Break’, ‘The Trials of Jimmy Rose’, ‘Barney Thomson’, ‘Noah’, ‘Moonfleet’, ‘The Hot Potato’, ‘Snow White and the Huntsman’, ‘Great Expectations’, ‘Tracker’, ‘Edge of Darkness’, ‘Fathers of Girls’, ‘Indiana Jones and the Kingdom of the Crystal Skull’, ‘Vincent’, ‘The Proposition’, and ‘Disappeared’ among others. Furthermore, Winstone also has 8 credits as a producer.

Winstone has garnered two BAFTA Film Award nominations. In addition, he has won the EDA Special Mention Award and Richard Harris Award. All in all, he has 12 wins and 18 nominations to his name to date.

Winstone has not revealed his current salary. However, he has an estimated net worth of around $ 5 million at present.

Winstone’s character in the movie ‘The War Zone’ attracted numerous controversies and criticisms. Additionally, he was part of another controversy after he revealed that he avoided paying tax for nearly 20 years. At present, there are no rumors concerning his life and career.

Talking about his body measurement, Winstone has a height of 5 feet 10 inches (1.78 m). Additionally, he weighs around 196 lbs or 89 kg. Furthermore, his hair color is dark brown and his eye color is brown.