Posted by MarriedBiography Posted on October 11, 2019 | In Dating , Divorce , Relationship
Share this 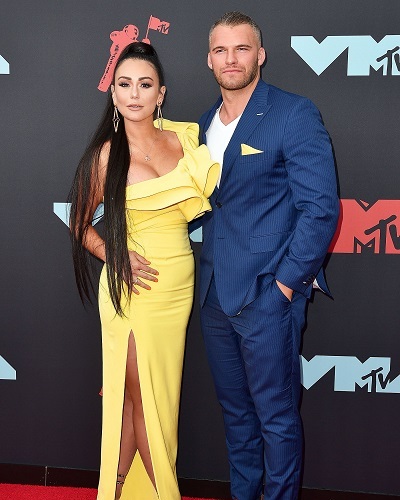 The reality TV actress Jenni JWoww Farley could not take it. She felt disrespected. After watching her boyfriend Zack Clayton Carpinello flirt with another woman, Angelina Pivarnick, Jenni has decided to end her relationship with Zack.

It is over between them! Jenni watched as her boyfriend Zack Clayton Carpinello flirted with Angelina Pivarnick. She could not tolerate his flirtations with another woman even when Jenni was still in a relationship with Zack. Hence, she decided to end it all. A source close to her has revealed this latest news update on her relationship status to US Weekly.

An episode of the show Jersey Shore: Family Vacation showed Jenni’s boyfriend Zack, 24 get close to Angelina Pivarnick, 33. After seeing this, Jenni, 33 took to her Instagram on 10 October 2019 to tell the world about how she felt about it. Jenni wrote:

“I feel disrespected by someone I called a friend and by someone who stated they loved me.”

The reality TV star Jenni went on to reveal that she completely had no idea of what was happening behind her back. She was in the dark about her boyfriend’s behavior. She wrote:

“For 5 months I was kept in the dark about this. For 5 months I was naive, probably laughed at and made into a story line that will forever haunt me. My heart hurts on so many levels. One thing I learned from tonight’s episode is know your value. Don’t ever lower your standards.”

What the episode showed?

In the episode, one can see that Zack is hugging Angelina. They are in a Las Vegas Club and Zack also touches the butt of Angelina. In the earlier trailer one day before, Angelina is heard telling her fiance Chris Larangeira that it was the wrestler who was doing advances on her. The same trailer also showed Jenni confronting Angelina on this matter. Jenni asks her:

“How much do you commit to a lie?”

Jenni was earlier a married woman. He husband was Roger Matthews. The wedding took place in 2015 and Zack was an attendee of this marriage. Jenni and Roger have two children namely daughter Melani who is now 5 and son Greyson who is 3. But unfortunately the marriage did not last and this March the couple split.

The same month, Jenni began a relationship with Zack. Jenni and Roger’s divorce got finalized this August. Talking about her new relationship, Jenni had expressed shock:

“I never in a million years thought I would be dating someone younger than me.”

She had disclosed very minute details of their sexual relationship:

“We’re completely different. Not my style at all,”

“He turns into this f–king monster in bed. I was like, ‘Are you an escort? What’s going on?’ It wasn’t normal. I had to look up positions and stuff.”

And now after the cheating scandal, there is a breakup.

Jwoww is an American television personality and graphic designer. She is famous for appearing on the hit MTV reality series Jersey Shore. She is also known for her own American reality television series, Snooki & JWoww.

JWoww has also made several appearances on other shows, such as TNA Impact! Disaster Date and Marriage Boot Camp: Reality Stars. More Bio…