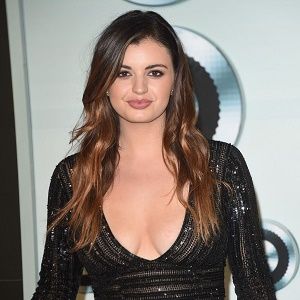 At times, it feels like I'm being cyber bullied.

Dancing - that's really what I do at parties. I dance and I hang out with friends. That's my partying.

I am worth something and I will be big.

Rebecca Black is possibly single and is not dating anyone at the present time. There is no confirmed information about her present relationship but, her social media speaks loud about her love life (single).

A young, beautiful teenager, Rebecca was dating South African personality, Casper Lee, in April 2013. Her relationship with Casper Lee was not confirmed by Rebecca and Casper in front of any media.

However, after this rumor, she has not been dating anyone and, there’s no reason unveiled by her. However, in April 2020, she said that she is a Queer.

Who is Rebecca Black?

Rebecca Black is a young and talented American singer best known for her greatest hit song ‘Friday’ with over 100 million views on YouTube. Apart from her singing talents, she sometimes exhibits her acting talents.

She is also an actress with roles in films ‘Katy Perry: Part of Me’ and ‘Legend of a Rabbit’.

An American singer, Rebecca Renee Black was born on June 21, 1997, to John Jeffery Black and Georgina Marquez Kelly both Veterinary physicians with Polish, Italian, English, and Mexican Ancestry. As of 2021, she is 24 years old.

This internet Sensation was born and raised in Irvine, California, the United States of America as an elder sister of Chase Black who was born on August 25, 1999. Bullying is the reason she transferred from a private school to a public school after studying her 6th grade.

She studied in that private school from Kindergarten to 6th grade and moved to a public school where the Musical Theatre program was offered.

But, again, for the sake of being away from bullying and to have a focus on her musical career, she chose ‘Homeschooling’. Later, due to her busy schedule, she started failing her English courses.

Later, on March 11, this video got a pace, achieved millions of views, and, starting at #72 on the Billboard Hot 100 with peaked up to #58. In the United States, it sold over 442,000 copies making her debut single being one of the internet sensations.

This video not only achieved the most talked-about video in social media but also gathered negative responses on YouTube and other social media. She also mentioned that she is a great fan of Justin Bieber and wants to record a song with him. In 2011, she signed with Debra Baum’s DB Entertainment for the ‘Friday or Die’ TV series.

She also played in films like ‘Katy Perry: Part of Me’ and ‘Legend of a Rabbit’ making her identity as an actress as well. In 2012, she released 2 singles ‘Sing It’ and ‘In Your Words’ which were followed by ‘Saturday’ in 2013. She released her new single ‘The Great Divide’ in 2016.

Talking about her awards and achievements, she was nominated for MTV O Music Awards and won the 2011 Teen Choice Awards.

Her estimated net worth is around $2 million but her salary is not disclosed.

The 19 years old talented singer Black is not in any relation. Some of the critics pass the impression that she, in different parties, never gives a shit to the hot boy’s out there making her a very passive personality in terms of love affairs.

Recently, Twitterverse posted that there is a possibility of Rebecca being pregnant which was again modified and posted by CNN iReport. But, this information did not gain any publicity and is yet to be confirmed.

She has received death threats over her music video Friday.

Rebecca Black has a height of 5 feet 5 inches. She weighs 58 kg and her body stats are 36-26-35 inches. Her hair color is dark brown and her eyes are also dark brown.

Her dress size is 8 US while her shoe size is probably 8.