Rebecca Ferguson is engaged to her fiancee Jonny Hughes, which she confirmed on 1 January 2022. She has been dating him for the past 7 years.

Rebecca had dated fellow The X Factor contestant and former One Direction member Zayn Malik for four months in 2011.

Prior to that, she dated Karl Dures, father of her two children for four years from her holiday in Tenerife. Rebecca was also in a relationship with the other guy who left her in pregnancy in 2014.

Was Rebecca Ferguson a teenage mom?

Yes, Rebecca is a teenage mom who delivered her first daughter Lillie May when she was 17 years old and her second son Karl when 19. She also has a daughter named Arabella, born in 2014 from her ex who anonymously dumped her. 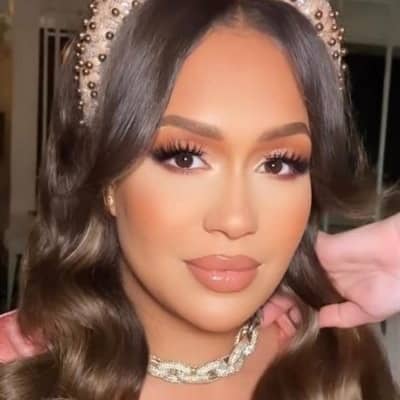 Who is Rebecca Ferguson?

Rebecca Ferguson is a British soul singer and songwriter who stood second in the seventh series of The X Factor.

The first album Heaven (2011) was released after The X-Factor, which peaked number 3 on the UK Albums Chart.

Rebecca Ferguson was born on 21 July 1986, at Mill Road Hospital, Liverpool under the birth sign Cancer.

Her father is of Jamaican descent while her mother has Caucasian ethnicity but their identities are masked. She spent the first two years of her life in Huyton. She grew up with her younger brother Sam and has mixed ethnicity.

Rebecca moved to a house on an estate in Woolton Village when her parents separated. Likewise, she got her primary education at Woolton Primary School.

She later got her secondary and college education from Gateacre Community Comprehensive School. Basically, she is a qualified legal secretary who studied at Hugh Baird College, Bootle.

Was Rebecca Ferguson abused in childhood?

Rebecca disclosed her traumatizing experience of being sexually abused at 8 years old on Loose Women while she was in a care home.

Further, she revealed that she was bullied as a kid because of her poor family condition, clothes, and toys.

Rebecca in her second audition to The X-Factor sang A Change Is Gonna Come in front of judges, Simon Cowell, Louis Walsh, and guest judge, Nicole Scherzinger.

Prior to this, she has unsuccessfully auditioned for P. Diddy’s Starmaker in New York and for The X Factor.

Rebecca Ferguson released her album Lady Sings the Blues on 9 March 2015 via RCA Record, shortly after the announcement through her Vevo Channel. The album peaked at number 7 on the UK Albums Chart.

Is Rebecca leaving the music industry?

Yes, it’s official! Rebecca in her Tweet on 25 November 2021 clarified that her upcoming fifth studio album is the final one and releasing in 2023.

Following the release, she confirmed to retire from the music industry.

What is Rebecca currently doing and aspires to do?

Rebecca is not just a singer but a political activist, campaigner, and most importantly, Senator and Board Director at Ivors Academy.

Rebecca was the new face of Walker’s crisps Sunbites as of June 2011. She also starred in an AMV BBDO ad released all over social media, Internet, and TV.

Additionally, she opened a beauty salon in Liverpool, Rebecca’s Beauty Boudoir in 2013, which shut down in 2015. She guest appeared on ITV’s Loose Women in 2017 where she appeared in April 2019.

The estimated net worth of singer Rebecca is $6 million which she garnered from her musical journey. Moreover, she earns a handsome salary, the detail of which is unavailable.

The same new track is rumored to be the lead single from her upcoming final studio album. Other than this Rebecca has managed to keep herself out of controversies.

Rebecca stands 5 feet and 7 inches tall and weighs around 58 kg. Her chest-waist-hip measurement, dress size, and shoe size are unknown.

She has brown hair and black eyes and a brown body complexion.

Rebecca is active on Twitter with the username @RebeccaFMusic with 656.9k followers.

Similarly, she is available on Instagram with the handle @rebeccaferguson__ which has 83.3k followers.