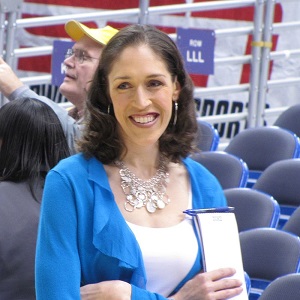 Basketball is always a piece of my life, but never the centerpiece

Athletes who take to the classroom naturally or are encouraged to focus on grades should be able to do well in the classroom. I believe the reason you go to college is to get your degree. It's not a minor league or an audition for the pros

My goals have gone from being an all-star to just being able to play basketball. I always took for granted that I could play. Now I know what a gift it is.

What is the relationship of Rebecca Lobo?

Rebecca Lobo is a married woman for a long time. She is married to the Sports Illustrated writer Steve Rushin. The couple got married on April 12, 2003, in Springfield, Massachusetts.

Lobo and Rushin have been married for 14 years now and their relationship is still very strong. She currently resides in Southwick, Massachusetts with her husband and children.

Who is Rebecca Lobo?

She is best known for formerly playing in the Women’s National Basketball Association (WNBA) from 1997 to 2003. She currently works as a reporter and color analyst for ESPN.

Rebecca Lobo was born on October 6, 1973, in Hartford, Connecticut, USA. As of 2021, she is 47 years old. Her nationality is American and she is of the mixed ethnicity of Ashkenazi Jewish, Cuban, Spanish, Polish, German, and Irish.

She is the youngest daughter of RuthAnn Lobo and Dennis Lobo. Both her parents were a teacher and her father was also a basketball coach. She has two elder siblings named Rachel Lobo and Jason Lobo.

Lobo played college basketball at the University of Connecticut, where she was a member of the team that won the 1995 national championship.

Before that, she played at the Southwick-Tolland Regional High School in Massachusetts.

Lobo began playing basketball at a professional level while she was at the University of Connecticut. During that time, she helped lead the Huskies to the 1995 National Championship.

In her senior year, Lobo was named the unanimous national player of the year. She also won the 1995 Naismith College Player of the Year award.

She was the first player in the Big East Conference ever to earn first-team all-American honors for both basketball and academics.

Currently, she works as a reporter and color analyst for ESPN with a focus on women’s college basketball and WNBA games. She was inducted into the Women’s Basketball Hall of Fame in 2010.

Rebecca Lobo has a height of 6 feet 3 inches. Her body weighs 64kg.

Besides these, she has dark brown hair and dark brown eyes. Her body measurements are 33-26-35 inches.

Also get to know more about the birth facts, education, career, net worth, rumors, height, and social media of different personalities like Kathryn Tappen, Andre Ware, and Jim Barnett.