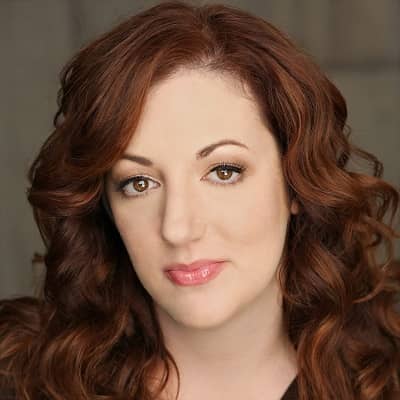 I honestly think the impetus for wanting to be an actor came from watching The Muppet Show.

Rebecca Metz is a married woman. She exchanged her vows with Andy Hermann at the Santa Barbara Zoo.

This couple’s marriage was unique because guests were standing and dancing and talking to each other, and there was no seating plan.

However, further details of her wedding are not revealed.

Who is Rebecca Metz?

Rebecca Metz is an American television and film actress, and a voice artist. She is best known for her roles in TV series like Better Things, Shameless, and Coop & Cami Ask the World.

This actress was born on 29 September 1973, in New Jersey, the United States. Her father and mother were both classically trained singers and they supported her decision to go into the field of acting.

She graduated with a Bachelor’s degree in Fine Arts from Carnegie Mellon University. She belongs to German-Jewish descent.

Her entertainer parents inspired her for career choice. Earlier, when she was a child, she used to love The Muppet Show. Rebecca wanted to be a part of creative fun and decided to be an actress.

Rebecca Metz made her professional debut in 1998 TV series Politically Incorrect. In 2000, she made her appearances in television series That’s Life and Strong Medicine.

Afterward, Metz played minor roles in series like ER, The King of Queens, Angel, Gilmore Girls. She also made guest appearances in Committed, Medium, and Malcolm in the Middle.

Throughout most of her career, she became the queen of guest appearances. Afterward, Rebecca got a big break in 2015 with the TV series Shameless as Melinda. She got huge popularity from his series. The next year, she played Teressa in Better Things.

This actress is still playing an essential role in this series. Since 2018, Metz starred as Jenna Wrather in Coop and Cami Ask the World.

In addition to television, Rebecca also starred in movies. She made her film debut in 2006 with K-7. Later, Metz appeared on The Shabbos Bigfoot, Asthma, Magic Camp, and ‘You & I, My Dear’.

Similarly, she has worked as a stage actor and a voice artist whose theater credits include The Behavior of Broadus, and Sheila Callaghan’s Kate Crackernuts and Burglars of Hamm’s.

The salary of this actress is under review. Similarly, according to some sources, she has an estimated net worth of $1 million.

There is no scandal and rumor about this actress. Meanwhile, she has managed to keep herself out of any controversy and rumor. Metz is doing well in her career.

Rebecca Metz has a decent height and weight. Moreover, she has brown hair and light brown eyes.