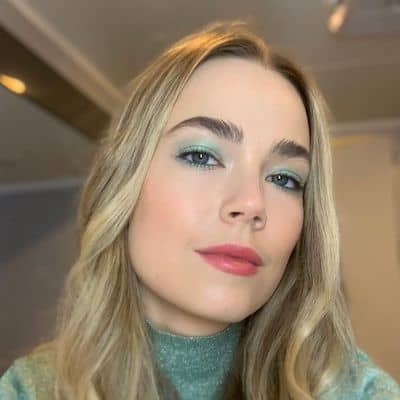 Rebecca Rittenhouse at present is focusing on her career and is possibly single. The details of her affair and boyfriend are hidden.

But she was in a romantic relationship with Chace Crawford in 2015 and broke up after four years in 2019.

Who is Rebecca Rittenhouse?

Rebecca Rittenhouse is an American actress. The public noticed her for appearing in Red Band Society, Blood & Oil, and The Mindy Project.

In 2019, she was seen as Michelle Phillips in the hit movie Once Upon a Time in Hollywood.

She was born as Rebecca Rittenhouse Meaders on 30 Nov 1988 in Los Angeles, California, United States. The name of her mother and her father is not revealed.

Rebecca’s ancestry is a mix of English and German.

Talking about her academics, she has attended the University of Pennsylvania and passed out in Romance Languages in 2011.

She also went to Atlantic Theater Company Acting School from 2011 till 2013.

Rebecca Rittenhouse is popular for her acting skills as she has appeared in several projects. Her first movie was Philadelphia, Ti Amo in 2011 as Veronica.

Her other TV credits are,

At present, her estimated net worth is around $1.7 million. However, her salary and other earnings are unknown.

This Blood & Oil actress is keeping herself away from rumors and is also not surrounded by any desperate scandals.

Regarding Rebecca Rittenhouse’s body features, her height is 5 ft 4 inches and her body weight is 54 kg.

Moreover, her eyes are hazel, her hair is dark brown, and has a brown skin complexion. She has a body figure of 34-24-34 inches.

Rebecca is available on social sites. She has Instagram and Twitter accounts with more than 85k and 9.5k followers respectively.

But she not also active on the Facebook platform.