Reflecting on the personal life of Rebecca Romijn, she has been married twice until her lifetime.

Previously, she was married to John Stamos from the year 1998 after dating for several years. But their married relationship couldn’t last long and they eventually got divorced in 2004.

After onwards, she was in a relationship with John Cusack in 2004 but it also didn’t last for long.

Talking about a present relationship of Rebecca, she is married to Jerry O’Connell. The couple got into a married relationship on 14 July 2007 after dating for several years.

They have been blessed with twin daughters, Dolly and Charlie. She doesn’t have any extra affairs and she is living a happy married life with her family. 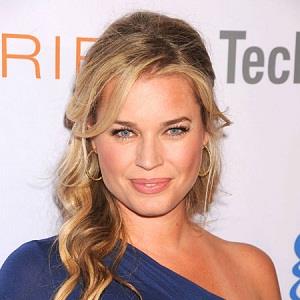 Sometimes I'm so tired, I look down at what I'm wearing, and if it's comfortable enough to sleep in, I don't even make it into my pajamas. I'm looking down, and I'm like, 'T-shirt and stretchy pants? Yup, that's fine. It's pajama-y, good night

Eating apples is good on so many levels. There's fiber in the skin that's really good for you. It helps with digestion and helps you absorb all the nutrients of everything you've eaten that day. Apples are a really good thing

I've become really good at turning down the boring, pretty girl roles, the trophy wife, supermodel, beautiful girlfriend roles. I mean, playing somebody who's perfect holds no allure for me, whatsoever. It's just boring.

Who is Rebecca Romijn?

Rebecca Romijn is a well-known American actress as well as a former fashion model. She is best known for portraying the role of Mystique in the first trilogy of the ‘X-Men‘ film series.

She is also known for her recurring role as Alexis Meade on the television series ‘Ugly Betty.’

Rebecca Romijn was born in Berkeley, California. He was born on 6 November 1972. She has an American nationality and she is of Dutch and English ethnicity.

She is the daughter of Elizabeth Romijn(mother) and Jaap Romijn(father). Her birth name is Rebecca Alie Romijn. Her mother worked as a Community College instructor of English as a Second Language and her father worked as a custom furniture maker.

She studies music at the University of California, Santa Cruz where she got involved in fashion modeling and lived in Paris for two years.

Talking about the career journey of Rebecca Romijn, she is active in the entertainment field since 1997 and still currently active.

Rebecca debuted in the 1998 movie ‘Dirty Work’ with the role of Bearded Lady. Her career took on a successful path when she was cast in the X-Men film series as Raven Darkholme/Mystique.

Besides her acting journey, she is also a model. She started working as a model in 1991 and has appeared on the cover of several magazines and Sports Illustrated. She has also appeared in advertising campaigns and walked for Giorgio Armani, Sonia Rykiel, and Anna Molinari.

She suffered a controversy at the beginning of her relationship with Jerry O’Connell.

Rebecca Romijn, moved on with the relationship but still has a name of the same person.. Who’s he?