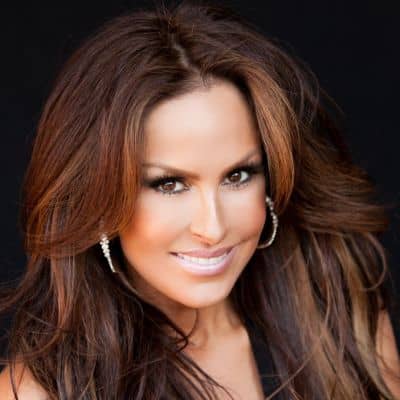 Who is the husband of Rebecca Villalobos ?

Rebecca Villalobos is a married woman. She is living a happy matrimonial life with her present husband, David Justice. He is an American broadcaster and former baseball sportsman. David Justice used to play as an outfielder.

They have three children altogether. Their first child a son David Jr. was born in 1999.

Then their other kids, daughter Raquel was born in 2004 and son Dionisio was born in 2002. David and Rebecca were seen in an episode of Celebrity Wife Swap in 2014.

Who is Rebecca Villalobos?

Rebecca Villalobos is a professional model, businesswoman, and American celebrity wife. She is well known for being the wife of an American broadcaster and former baseball sportsman, David Justice.

Rebecca founded a professionally collaborated calendar featuring ethnic women, a furniture line, and a jewelry collection. She dedicates her days to her businesses, clients, and her family.

The beautiful model was born on August 16, 1973, in the United States of America. As of 2022, she is 49 years old holding an American nationality. Similarly, her ethnicity is Caucasian and as per the astrologers, her birth sign is Leo.

Moving on to her parents, she was born to her mother, Esperanza Villalobos, and her father, Denis Villalobos.

There is no info regarding her siblings.

As per her academics, she earned her graduation with a degree in Design and Fashion Merchandising from Long Beach State University.

Rebecca Justice has previously worked for Moda Prima, Guess Corporation, and Elle Active. She is also a professional model.

Adding more, she is the founder of a professionally collaborated calendar featuring ethnic women, a furniture line, and a jewelry collection. She commits her days to her businesses, clients, and her family.

However, she has been in the limelight due to her celebrity husband, David Justice.

David Justice as a baseball player was first selected by the MLB team Atlanta Braves in 1989. He was with them for seven years and left in 1996. After a year, he was drafted by another team Cleveland Indians in 1997 and exited in 2000.

For his amazing playing style, David was given several titles. Some of them are,

After his retirement, he started working as a broadcaster. First, he joined ESPN baseball telecasts as a commentator and worked for two years. Then he was appointed by the YES Network.

The wife of Major League Baseballer, Rebecca has an estimated net worth of around 500K USD.

By 2022’s sources, her husband, David Justice has an estimated net worth of $40 million. Additionally, his yearly salary is around $7 million.

Rebecca has maintained a clean profile. That’s why she is not involved in any serious rumors and controversies yet.

The celebrity wife has an average height and weight as per her age.

Talking about her looks, Rebecca Villalobos is a beautiful lady with brown hair and dark brown eyes.

Regardless, she has her business pages for her jewelry and furniture.