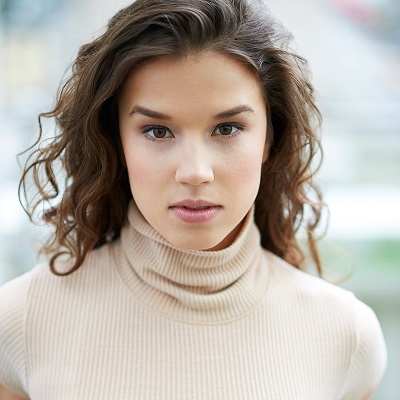 Rebekah Asselstine is a married woman. Her husband, Jacob Hoggard is a Canadian singer and songwriter. Jacob is the lead singer of the pop band, Hedley.

The couple tied the wedding knot on 31st December 2018. To date, the couple is leading a happy married life with each other with no rumors of separation.

Who is Rebekah Asselstine?

American Rebekah Asselstine is an actress and choreographer. Asselstine is renowned as Bella of Barbie Video Game Hero and Assistant of Supergirl.

Last, in 2020, she featured the TV movie, The Perfect Pickup as Sheri.

To date, she has not shared any details on her family background including her father, mother, and siblings. However, as per IMDb, she is adopted. Also, details on her academics are not available.

At a very young age, she started dancing. When she became 18, she took over the dancing studio, Sophia’s School of Dance, and started her career as a choreographer. After a year, she joined the professional training group, Modus Operandi.

In the year 2013, she made her acting debut with the TV movie, Restless Virgin as Hot Tub Girl. However, her role was uncredited. Following the movie, she made her appearance in the TV series including Fools for Hire and Body Language.

Besides that, she also earns through her dancing school, Sophia’s School of Dance.

The charming actress has brown eyes with brunette hair. She stands at a height of 5 feet and 2 inches and has a decent weight.

Those statements are not true for her husband, Jacob who has been accused by women several times of sexual misconduct and rape. The identity of women was not discovered for their privacy. However, Jacob told that both of the sexual encounters happen to be consensual.

He is active on Twitter with the handle, @RJAsselstine with 1k followers.