Updated On October 12, 2022 | Published By: Brandy Stratton | In Dating , Interesting Facts
Share this 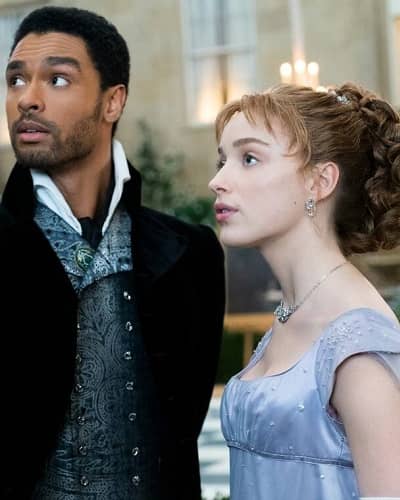 The interviewer Kit Hoover joked that the two were actually dating but the fact is they live in completely different locations. He said,

“I think that everything you need to know is on camera. The sparky words, scripts and material are more than enough.”

Phoebe also discussed their on-screen intimacy in an interview with Grazia UK. She said that their steamy scenes were fun to shoot. She revealed,

“I’ve done sex scenes before that I can’t believe I did. It was only five or six years ago, but it would not be allowed now.”

The two are dating as both denied the rumors.

1) Grew up in Zimbabwe

Rege-Jean Page was born in Harare which is the capital of Zimbabwe. His parents were nurses and preachers. Being born to a mixed-race couple, he grew up in diverse cultures. Being born with diverse culture impacted his childhood. He called himself a ‘walking political statement’.

“Zimbabwe was still a relatively young country when I was living there, and its post-apartheid society was only newly formed. Being a mixed-race child in that environment means that you have to think about crafting your own identity and you question why you belong in that world.”

Rege-Jean Page moved to north London with his family when he was 14 years old. He and his brother formed a punk band. They used to write and play guitar music. Similarly, they had colored their head and used to scream at people. He felt very comfortable when he could scream at people and be different.

Being in a punk band helped him with a career path.

Also read Who is Lia Smith? Know about her married life with Justin Bartha, 8 quick facts about Lia, net worth, biography

Rege attended the Drama Centre London after two years of auditioning. From there he learned how to be light about his work while being serious. He played the role of a lawyer in For the People which ran for almost two seasons on ABC.

Similarly, he appeared in British TV shows like Waterloo Road, Casualty, and Fresh Meat. He made his TV debut through the 1977 miniseries remake Roots. Rege is playing the lead role of Simon Basset in the 2020 TV series Bridgerton.