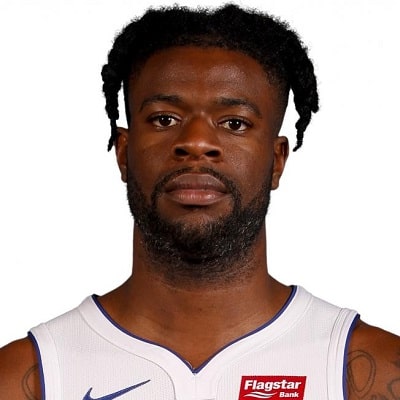 He has a son, Treyson whose mother’s name is not known.

Who is Reggie Bullock?

Reggie is currently playing for the New York Knicks of the National Basketball Association (NBA).

She had two sisters, Mia Henderson and Keiosha Moore.

Again On October 29, 2019, Keiosha Moore, Bullock’s other sister, was murdered in Baltimore.

In 2013, the Los Angeles Clippers selected Reggie with the 25th overall pick in the 2013 NBA draft.

Then, he signed a contract with the Clippers on July 11, 2013, and made his NBA debut scoring two points against their opponent, the Los Angeles Lakers.

Later, on 9th July 2015, he joined Detroit Pistons and on 25th October 2015, the Pistons exercised their fourth-year team option on Bullock’s rookie scale contract, extending the contract through the 2016-17 season.

During 2017 and 2018, he played against various teams. Such as Orlando Magic, San Antonio Spurs, Charlotte Hornets, Milwaukee Bucks, and Minnesota Timberwolves.

Furthermore, on 6th February 2019, he switched to the Los Angeles Lakers in exchange for Sviatoslav Mykhailiuk and a future second-round draft pick.

Moreover, on 16th July 2019, Bullock signed a contract with the New York Knicks. And he went through surgery for a cervical disc herniation.

Reggie has dark hair and eyes. He has a height of 6 feet 6 inches and weighs 93 kg.