Hollywood Walk of Fame, Regis Philbin is an actor, singer, television presenter. Regis is married to the love of his life since 1970, and he has four children. 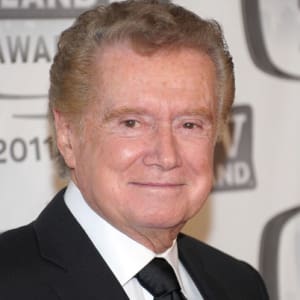 I had a blocked artery. The great thing about it was that all the people sitting at home, watching on the couch, feeling the same thing... got up and called the doctor. I still get letters thanking me for saving people's lives

Celebrating his 90th birthday, after all these years. When I was a little kid, I used to watch him when he was in his heyday, and it was a great show tonight, it really was, it meant a lot to a lot of people.

Regis Philbin was married to Joy Senese, an interior designer on 1st March 1970.

Who was Regis Philbin?

Regis Philbin was an American media personality, actor, and singer. He was well known for hosting talk and game shows since the 1960s.

Additionally, he served in the Navy and got his television to start serving as a page for the Tonight Show in the 1950s.

Likewise, Regis also gained his first network TV exposure in 1967 as Joey Bishop’s sidekick on The Joey Bishop Show. He was also known as the host of the New York City-based nationally syndicated talk show Live! with Regis and Kelly.

This actor passed away on 25 July 2020, in Greenwich, Connecticut. He was 88 years old and the reason for the death was heart disease.

Regis was born in The Bronx, New York, the United States on August 25, 1931, to parents Frank Philbin (father) and Filomena Boscia (mother).

His father used to serve in U.S. Marine. He has a sibling, Frank M. Philbin, who expired in the year 2007 due to non-Hodgkin lymphoma. He belongs to American nationality and mixed (Italian- Albanian) ethnicity. His birth sign is Virgo.

On talking about his profession, Regis Philbin was a page at The Tonight Show in the 1950s. Then, he wrote for the Los Angeles talk show host Tom Duggan and nervously filled in one night when the hard-drinking Duggan didn’t show up.

Whereas, he was also an announcer on The Tonight Show in 1962. Unfortunately, in 1957, he left his job as an assistant news editor to Baxter Ward at KCOP, Los Angeles to make his fortune in New York. His replacement at KCOP was George Van Valkenburg.

In fact, his first talk show was The Regis Philbin Show on KOGO-TV (now KGTV) in San Diego. In 1964, Westinghouse Broadcasting picked up Philbin’s talk show for national syndication in the late-night time slot (replacing Steve Allen). Similarly, he also gained his first network TV exposure in 1967 as Joey Bishop’s sidekick on The Joey Bishop Show on television (1967–1969).

In 1964, he took over the show that replaced The Steve Allen Show when Steve Allen left the show. According to him, Carson was his inspiration (PBS, 2008, Pioneers of Television).

Likewise, he also presence brought the show from the bottom of the local ratings to No. 1. Whereas, he was also a game show host. In fact, he also hosted The Neighbors, a short-lived game show on ABC from late 1975 to early 1976. Both shows suffered from poor ratings.

Then, he won Daytime Emmy Award for Outstanding Game Show Host for Who Wants to Be a Millionaire (1999).

There was a rumor that he was in a secret relationship with Kelly Ripa. Currently, he was far from rumors and controversies.

On talking about his body measurements, Regis had a height of 5 feet 7 inches. Additionally, he weighed 71Kg. His hair color was grey and his eye color was dark brown.

Few Facts You Did Not Know About Regis Philbin’s First Wife Catherine Faylen!