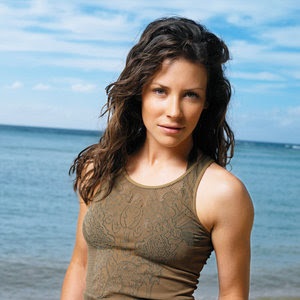 I love my neighborhood: There are Russian families, the artistic community, the gay community, and industry professionals - all ethnicities and ages are represented. That's the kind of neighborhood that I grew up in

I didn't know a soul when I got to New York, and I felt really displaced. The first week I was euphoric, and then I realized how isolating the city can be

Talking about her personal life, she was in a romantic relationship with Kiefer Sutherland in 2003. Despite having a perfect relationship anyone would dream off they separated in 2005.

Who is Reiko Aylesworth?

Beautiful Reiko Aylesworth is an American film, television and stage actress. She gained a lot of fame and popularity for her portrayal as Michelle Dessler in television series 24.

She opened her eyes for the first time on December 9, 1972, in Evanston, Illinois, United States. Her nationality is American and ethnicity is mixed(Dutch, Welsh, and Japanese).

However, not much is there regarding her earlier days and childhood. Much of the attention and fame she earned over the years is entirely focused towards her work and talent. Despite that, it will not be wrong to say that she had a decent upbringing which has played a significant role in her success.

In addition, she attended the University of Washington to study neuroscience. However, there is no information in detail regarding her education and qualification.

Reiko initiated her career starring in several theatrical plays. As a result, she appeared as an actress for the famous theaters like ‘Springfield Theatre Centre’, ‘Seattle Children’s Theatre’ and ‘Intiman Theatre Company’.

In 1993, she made her first break as Rebecca Lewis in the TV series ‘One Life to Live’. Later, her amazing talents grabbed her a lot of attention and offers lined up to be added to her resume. Eventually, she appeared in other TV series like ‘Lifestories: Families in Crisis’, ‘Law & Order’, ‘A Will of Their Own’, ‘Now and Again’ and ‘American Embassy’.

She landed her most successful role in her entire career as Michelle Dessier in the famous television series ‘24’. She got huge applaud from her fans for her mesmerizing performance in the series. Moreover, she appeared in TV series such as: ‘ER’, ‘The Understudy’, ‘Lost’, ‘The Forgotten’, ‘The Good Wife’, ‘Elementary’, ‘King & Maxwell’, ‘Revolution’ and ‘Drop Dead Diva’.

Reiko Aylesworth: Salary and Net Worth

During her entire career, she has always maintained a top-notch professionalism over her work. Her work is always admirable and her hard work reflects on how well she is doing in her career.

She always has maintained a decent and admirable image in her entire career without attracting any rumors and controversy. Instead of attracting unwanted attention, she has worked day and night to achieve her dream and make every believe that she has no interest in becoming a controversial figure.

Reiko has the height of 5 feet 4 inches. Her body weighs 54kg. She has light brown hair and brown eyes. Her bra size is 34A, shoe size is 8US and dress size is 6US.