Rene Gube is an American actor, comedian, and writer. He is married to Briga Heelan and has a one kid.

Rene Gube is a married person. He has been married to his long term girlfriend Briga Heelan since May 8, 2015. His wife Briga is an actress and a comedian. They tied their knot after a 6-month long engagement.

The couple has welcomed a daughter named Bennet Alejandra Gube on March 23, 2017. The couple is living together happily and enjoying their blissful life. There is no sign of divorce between them hence their love life is going well. 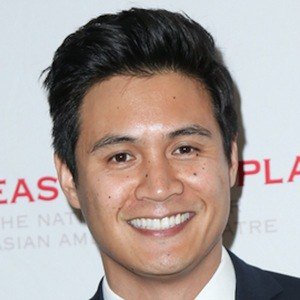 “I think my spleen is somewhere in the municipal sewer system. Ohhhhh, my butthole's the gateway to Hell!”

Who is Rene Gube?

He is currently working as an executive story editor and a writer for the critically acclaimed CW show ‘Crazy Ex-Girlfriend’ in which he is also portraying the recurring role as Father Brah.

He grew up in Rancho Penasquitos, San Diego. His exact date of birth is unknown so his age is not known, however, he might be in his 30s.

His parents are from Philipinnes but he was born and brought up in Rancho Peñasquitos, San Diego, California. Also, he has not disclosed information regarding his parents, siblings, and childhood.

Rene holds American citizenship but his ethnicity is Filipino.

He joined a speech and debate club at Mount Carmel High School. Apart from that, he has not provided other information about his education history.

Gube started his career as a comedian during high school. Before that, he was a high school teacher. He formed a comedy sketch group, Touchblue, with his friends in Los Angeles. The group became famous and popular which ultimately led him to perform on several stages throughout California. He has also collaborated with the Upright Citizens Brigade in which he studied and frequently performs with them.

He debuted his film career from the role of Passive Aggressive Coffee Drinker in the ‘Surprise party in 2010. Then, he appeared as Cell-mate in ‘Seeking a Friend for the End of the World’ in 2012, Patrick in ‘If We Dated’ in 2013, and as himself in ‘Underground Comedy’ in 2015.

Gube also portrayed the role of Randall in the television series ‘Community’ in 2011, Mike ‘Threepeat’ Wen in ‘Ground Floor’ from 2013 to 2015, Postman in ‘Growing Up Fisher’ in 2014, and he is currently portraying the role of Father Brah in the series ‘Crazy Ex-Girlfriend’ since 2015.

Gube has not been so successful in collecting awards and nominations in his name to date.

The talented actor must have earned a huge amount from his professional career but he has not revealed his exact total assets, salary, and income. As of 2022, he has an estimated net worth of $5 million.

There was a rumor about his wife’s pregnancy and the rumor is closed as the couple has welcomed a beautiful daughter.

Gube has got black hair and black eyes. Information regarding his height, weight, etc. is not available.