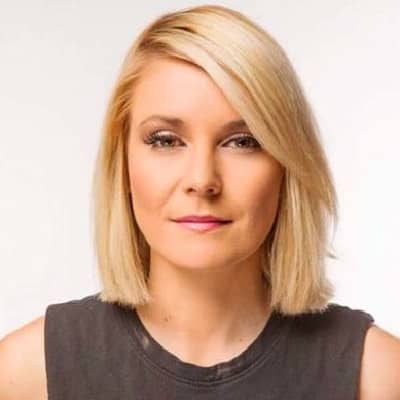 She is married to Jonathan Good better known as Jon Moxley & Dean Ambrose. The duo started dating since 2013. The couple tied the knot on the 9th of April, 2017 at their Las Vegas home.

They married at 1 am on Sunday. They both called the 24 hours Pastor and has has a friend of then as a witness while their marriage.

As of now, the couple is happily living together in their home at LasVegas, Nevada, USA. They don’t have any children yet.

Who is Renee Young?

Renee Young is a Canadian sports broadcaster, TV host, and actress who is best known for being the sportscaster for The Score TV Network.

Renne is best known for working in WWE as a commentator, presenter, and interviewer from 2012 and 2020. Further, she appeared as a main cast member on the reality television series Total Divas.

The actress started hosting her own WWE Network show, Unfiltered with Renee Young from 2015.

She was born on September 19, 1985, in Toronto, Ontario, Canada. Her birth name is Renee Jane Paquette.

Her father was a concert promoter and her mother a bookkeeper. Although their names are not disclosed yet. Young also has a brother but his name is not known.

From her childhood days, she was passionate about modeling and acting.

She holds Canadian nationality and is of mixed (English, Ireland, French Dion, and Scotland) ethnicity.

The information regarding ger education isn’t available. She finished her education from the local college of Toronto city and moved to LA to pursue her career.

Completing her education, Renee Young started training in improvisational comedy thinking to pursue a career as a comedy actress.

After spending some time in Los Angeles, she returned back to Toronto and appeared in the audition of films, music videos, television series, and commercials.

Renee began working for The Score Television Network, 2009. She made her appearances on the program called “Right After Wrestling”. She worked three years for “The Score”.

The actress started to work on WWE in 2012 with the ring name “Renee Young”. She worked as a commentator, presenter, and interviewer from 2012 and 2020 in WWE.

Renne was also the co-host for the sixth season of Tough Enough working alongside, Chris Jericho in June. She also works associating with different media such as Bite TV, Toro Magazine, and others.

She was also the third main presenter on the JBL and ColeShow. From 2015, she started to host her own show, Unfiltered with Renee Young which airs on WWE Network. She interviews with various WWE  employes in the show.

In an episode of Raw, 2018 Renne filled a guest commentator for Jonathan Coachman. She was the first woman to call an entire episode of Raw.

In Oct 2019, she started hosting then ew studio program WWE Backstage on Fox Sports. She announces her departure from WWE in Aug 2020.

In 2005, she was featured in Kelly Clarkson‘s music video, Behind Those Hazel Eyes. Further, she has made her appearance in various other music videos and commercials.

She is also a philanthropist and works through different charity and foundations. She also made her appearances in several commercials and advertising.

As of 2020, the net worth of Renne is around $6 million. Information regarding her salary is not available.

Her major source of income is from her hosting career. She has also done commercials for Oxy and Noxaema.

She has blonde colored hair and brown colored eyes.

Also, get to know about Daniele Donato, Marja Allen, and Sandy Jobin-Bevans.

Renee Olstead Married with Pianist!! Is she having a baby??