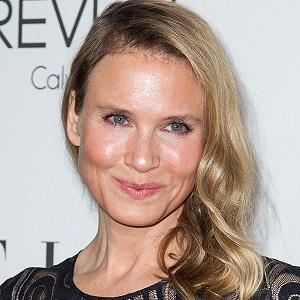 I remember just lying in the grass, staring at the clouds, wondering where they drifted off to after they floated over Texas. I never would have imagined that one day I would follow one of those clouds and find myself in Hollywood

I believe in love, but I don't sit around waiting for it. I buy houses

Being horrible in a big film is a quicker nosedive than doing an obscure film and making no money.

Renée Zellweger has been involved in numerous relationships in her career. From 1999 to 2000, she was engaged to Jim Carrey. In 2003, she had a brief relationship with musician Jack White. She married singer Kenny Chesney on May 9, 2005.

The marriage, however, didn’t last long and four months later, the couple obtained an annulment. She began dating Bradley Cooper in 2009, after having met on the set of Case 39 in 2006 and separated in 2011.

Since 2012 till 2019, she has been in a relationship with musician/songwriter/producer Doyle Bramhall II.

Who is Renée Zellweger?

Renée Zellweger is an Academy Award-winning American actress and producer. She is best known for her roles in the films ‘Cold Mountain’, ‘Bridget Jones’s Diary, ‘Cinderella Man’ among others. She was engaged to Jim Carrey for about a year.

Renée was born in Katy, Texas on April 25, 1969. She was born to her father Emil Erich Zellweger, a mechanical and electrical engineer, and mother, Kjellfrid Irene, a nurse, and midwife. She has a brother, Drew Zellweger and she does not have any sister.

Renee was brought up in a Catholic family and her ethnicity is mixed of Swiss, Norwegian, Finnish/Kveeni, Swedish, and possibly Sami.

Talking about her education status, she went to Katy High School, where she was an active cheerleader, gymnast, speech team member, and also drama club member.

She later went to the University of Texas at Austin and graduated with a B.A. in English in 1991.

Renée Zellweger’s first job after graduation was working in a beef commercial while she simultaneously auditioned for various roles around Houston, Texas. She appeared in several indies and low-budget films while she was in Texas.

Her first major movie role in a movie came with the 1994 horror film ‘Texas Chainsaw Massacre: The Next Generation, alongside Matthew McConaughey. Her breakthrough in her career was after she became widely known to audiences with ‘Jerry Maguire’ (1996). She gained the prized lead role of Bridget Jones in 2001 in the British romantic comedy ‘Bridget Jones’s Diary.

Renée has appeared on the covers and photo sessions of various magazines throughout her career and is also active in various charity work. She took part in the 2005 HIV prevention campaign of the Swiss federal health department.

She won the Academy Award, the Golden Globe, and the BAFTA Award for Best Supporting Actress for ‘Cold Mountain’ and received six Golden Globe Award nominations, winning three for her performances in ‘Nurse Betty’, ‘Chicago’, and ‘Cold Mountain’. As of now, she has a total of 28 wins and 73 nominations to her name.

Although the exact amount of salary of this American actress is not known, her net worth is estimated to be around $90 million.

Renée has often been part of controversies due to the rumors of plastic surgery on her face.

She has a blue eye color and blonde hair color. She wears a shoe size of 9(US) and her dress size is 4(US).