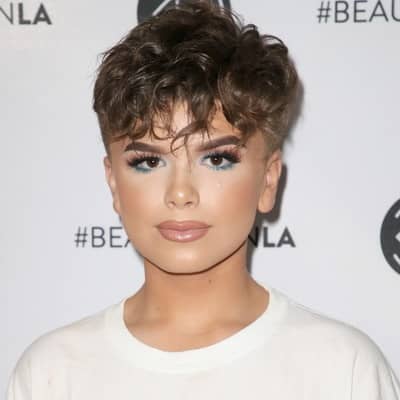 Reuben De Maid is just in his teen and is very young to be in a relationship with someone.

He is now more focused on building his career.

Who is Reuben De Maid?

Reuben De Maid is a Welsh singer and a songwriter, who’s gained his success due to his vocal skills, a bright personality, and outstanding make-up. He who rose to fame after performing live on NBC’s Little Big Shots.

He is also recognized for his appearance on The Ellen DeGeneres Show in April 2017. Furthermore, he is a Teen Beauty Vlogger who post different m makeup Tutorials in his Youn Tube Channel.

Reuben was born in Cardiff, Wales on March 24 of 2005. His mother’s name is Vicki Maid. She also appears with him on the show, Being Reuben. His father’s name is Matthew Maid who works as a lawyer.

Reuben’s grandfather, who he refers to as “Bampa also participates with him in his shows.

He has a sister named Coco and brother, Sonny whom he did a duet with on YouTube and featured them on social media.

Reuben holds Welsh nationality and is of French-Welsh ethnicity. His academics history is not revealed.

Wales became an online sensation after he performed a song, called ‘And I Am Telling You I’m Not Going’ from ‘Dreamgirls’ Broadway musical in The Ellen Degeneres Show, April 2017.

Ellen Degeneres also shares Reuben’s interview videos with the caption: “I absolutely love this kid from Wales – his voice, his character, his uniqueness, all of it.” in her official Facebook account.

Then he was seen on American talent show Little Big Shots, which is produced by Ellen and claims to feature “the world’s most talented and extraordinary kids”. Reuben also performs live on NBC’s Little Big Shots.

Reuben De Maid explained that the was interested in make-up when he was just eight years old. He used to watch the phone for hours and learned from tutorials and blogs. He also admitted that he tries to wear make-up to school, although he gets told off for it. The boy also was bullied for his looks and makeup before.

Though he has now gained much love and popularity and has his own fanbase. He posts different cover songs and makeup tutorials in his channel now and the makeup tutorial he filmed featuring the latter has around 8.3 million views.

As of now, he appears on the Television show, Being Reuben that airs on Fridays at 9 p.m. ET on The CW. It is the show about how a loving family gives their special Reuben the strength to stand out.

However, his salary and other incomes are not disclosed.

Till the date, he has not been in any sort of rumors and controversies. Though he usually appears on different media and interviews with his bright personality and talent.

Reuben De Maid stands with a height of 4 feet 4 inches and weighs  50 kg. He has brown colored eyes with brown hair but usually dyes his hair to blonde.

Furthermore, this singer has his own YouTube channel with over 233K subscribers.

Also, get to know about other You Tubers like Life with Mak, Cassey Ho, Teri Hatcher, and Guy Tang.