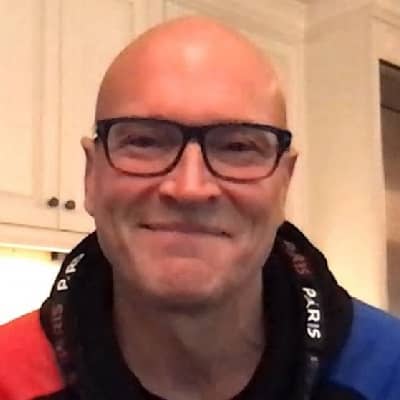 Previously, he was married to Bridget Hobbs. They tied the knot on August 10, 1991, in a private wedding ceremony attended by close friends and family.

Rex and Bridget welcomed four children named Zeke, Caley, Tatum, and Tyson. However, their married life fell apart, and they officially divorced in 2012, sharing the joint custody of their children.

Who is Rex Chapman?

Rex Chapman is an American former professional basketball player and Social media influencer. He plays as the shooting guard who played for four NBA teams from 1988-2000.

The former professional basketball player was born on October 5, 1967, in Bowling Green, Kentucky. As of 2021, he is 54 years old. He holds an American nationality and belongs to the Caucasian. Rex’s full name is Rex Everett Chapman. His Zodiac sign is Libra.

He is the son of Wayne Chapman who played in the American Basketball Association and coached at Kentucky Wesleyan College.

His father Wayne is the two times national champion of NCAA Division II. His mother’s name is Laura Chapman. He has also a sister named Jenny Chapman.

Chapman heavily recruited by many universities, but he chose to stay close to home when he signed with the University of Kentucky. For the University’s basketball team, he played in NCAA Tournament.

He became the first 1988 NBA draft pick of the expansion Charlotte Hornets and played on four National Basketball Association teams at the age of 12. He averaged 16.9 points per game in his rookie season, had several memorable games, and appeared in two slam dunk competitions in 1990 and 1991.

Similarly, He signed with the Phoenix Suns where he has two memorable games against the Seattle Supersonics during the 1996-97 season. In the 1999-2000 season, Rex was injured and declining performance led him to retire.

After retirement, he has been the television presenter of a Block or charge show which appeared on Adult Swim. He co-hosts the program with his buddy David Helmers out of Helmer’s garage

Rex is also a social media influencer popular for his work on Twitter by posting a video of dolphins charging into a paddle boarder. During the Covid-19 pandemic, he was able to raise over$150,000 to support those experiencing financial hardship.

Rex was harassed by other students and coaching staff for interracial dating in high school. Similarly, after retirement, he was diagnosed with attention deficit disorder and depression, for which he was medicated.

Also, he arrested for alleged theft at a Scottsdale Apple Store.

Rex estimated net worth is around $33 million throughout his profession.

According to the sources, Chapman has made $31 million through his playing career whereas he earned another $6 million off the court.

Rex is 6 feet 4 inches tall approximately and his weight is around 84 kg. Likewise, he has brown eyes color. Furthermore, no information available regarding his other body measurement.

Rex joined Twitter in June 2011 with the handle @RexChapman where he has over 1.1M followers. Moreover, he is not active on other social media sites.