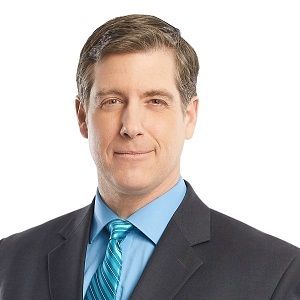 Reynolds Wolf is a married man. He tied the knot with Erin Cogswell-Wolf. In addition, the couple has also welcomed four children, three daughters, and one son.

Since their marriage, they are living happily. Apart from that, there are no rumors of external marital affairs and girlfriend of Reynolds.

Who is Reynolds Wolf?

Reynolds Wolf is a Journalist and Meteorologist from America. Currently, he forecast the weather news on The Weather Channel.

Previously, he has worked for CNN as a forecaster of CNN Saturday Morning and CNN Sunday Morning.

Currently, he is the host of AMHQ Weekend.

He was born on March 16, 1970, in Charlotte, North Carolina, United States. He grew up in Jemison, Alabama with his parents.

Talking about his childhood, there is not any information regarding it. He holds an ethnicity of Caucasian.

Concerning his education, Reynolds completed his graduation from Jacksonville State University and later gained a certificate of Broadcast Meteorology from Mississippi State University.

Reynolds began his professional career as a journalist. Initially, he worked in KMOV in St. Louis, Missouri and WDIV-TV in Detroit, Michigan.

Later, he joined WKMG in Orlando, Florida, and worked there for a couple of years. In addition, Reynolds has also served in several TV stations as a reporter and journalist. He has also hosted some shows for KSBY and WJSU.

Apart from that, Reynolds started to work at CNN in 2006. During his time at CNN, he covered some popular shows such as CNN Saturday Morning, CNN Sunday Morning, and weekend editions of CNN Newsroom.

After leaving CNN, he joined The Weather Channel and hosted many shows as well covered the various news. Currently, he is the host of AMHQ Weekend.

This reporter’s net worth is estimated at around $1 million. Moreover, his salary as a journalist is around $38k per year.

So far, there are not any drastic rumors regarding his personal and professional life. Moreover, Reynolds has not been dragged into any controversy yet. It seems, he has more focus on his work rather than on other stuff.

There is not any information regarding Reynolds Wolf’s height and weight. Furthermore, he has brown eyes and light brown hair.