Real estate agent and TV Personality. Farahan is renowned for his appearance in Bravo's reality TV series, Shahs of Sunset. 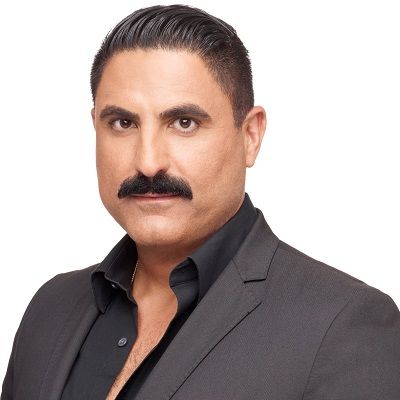 Reza Farahan is married to Adam Neely. His husband, Adam is an actor by profession. They married on the 3rd of October 2015.

Currently, the couple is facing hardship in their relationship. Also, many rumors have hinted at ending their marriage and getting divorced.

However, both of them are trying to make their relationship work together. Also, their Instagram posts suggest that they are also gaining success in mend their marriage. Last, the couple was spotted on the Golnesa Gharachedaghi‘s baby shower party.

Who is Reza Farahan?

Iranian Reza Farahan is a real estate agent and TV Personality. Farahan is renowned for his appearance in Bravo’s reality TV series, Shahs of Sunset.

He is the founder of the hairline product, Be Obsessed.

Reza Farahan was born Reza Mehdi Farahan on the 5th of August 1973 in Tehran, Iran. He is of Iranian ancestry.

His father, Manoochehr Farahan was converted to be Muslim to marry his mother.

He has a sister.

Since his childhood, he developed passion for real estate. As he was a child, he used to see pictures of the house in the newspaper. Later, he pursued his career as a real estate agent. Then he joined Keller Willam Realty in West Hollywood.

After a successful career as a real estate agent, he expanded his career as a businessperson. As a businessman, he established the hairline business, Be Obsessed. Initially, the company produced shampoos. But the increasing number of clients, the company is currently producing oils other products too.

In 2012, he first started appearing in the TV series, Shahs of Sunset. The show is based on the style of a Persian-American who has been living in Los Angeles. Also, the shows illustrate how they are maintaining their traditional life and friendship.

After the series, he appeared in other TV series including Celebrity Page, Bethenny, and The Wendy Williams Show. Last, in  2015, he also featured on Sharknado 3: Oh Hell as Park Police Guard.

Apart from that, he also earns through his Hairline Business.

He is a black-eyed brunette. His height is 5 feet and 8 inches.

Recently, Reza and his husband are going through a hard time in his married life. On Sunday’s episodes in Shahs of Sunset, Reza confronted his husband and Ali Ashouri.

Ali is a friend of Destiney Rose of the show. Ali told Rose that Adam has been sharing nude photos and playing strip Jenga in his back. Hence, for the proper clarification, he confronted both of them at the same time.

During the conversation, Ali said Adam has been sending texts and harassing him since they were friends. Listening to that, Reza got so angry that he threw water at Ali and pushed him out of the chair.

Also, he warned Adam to not send any text to others that are inappropriate and sexual.