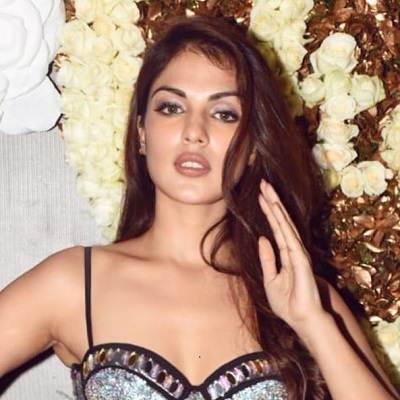 But how does my silence give you the right to tell me that you will get me RAPED and MURDERED if I don’t commit suicide @mannu_raaut ?

Do you realize the seriousness of what you have said? These are crimes, and by law no one, I repeat NO ONE should be subjected to this kind of toxicity and harassment .

Previously, she was in a relationship with the late actor, Sushant Singh Rajput. Both actors were in the relationship for a couple of months. They tried to hide their relationship from the public eyes. However, Rhea revealed that they were planning to get married in November 2020.

Before that, she was rumored to be in a relationship with the actor, Aditya Roy Kapur. In the matter, none of the actors had made any comments.

Who is Rhea Chakraborty?

Next, she will be appearing in the movie, Chehre as Neha Bharadwaj.

Rhea Chakraborty was born on the 1st of July 1992 in Bangalore, Karnataka. She is of Asian ethnicity with Bengali roots. As of 2020, she is 28 years old. Also, her zodiac sign is Cancer.

Her father, Indrajit Chakraborty is an Indian army by profession whereas her mother is a homemaker. She has a younger brother, Showik Chakraborty.

Talking about her educational background, she completed her High School education from the Army Public School Ambala Cantt.

She took the first step in the entertainment industry through MTV India’s show, TVS Scooty Teen Diva. In the show, she came out as the first runner up. After that, she explored the entertainment sector as a VJ. As a VJ, she has hosted various MTV shows that include TicTac College Beat, MTV Gone in 60 Second, and Pepsi MTV Wassup.

After that, she started making appearances in the various TV commercials too including Yepme New and Stayfree. In 2012, she debut in the Telugu film industry with the movie, Tuneega Tuneega. In the movie, she was cast as Nidhi against the actor, Sumanth Ashwin.

The following year, she made Bollywood debut with Mere Dad Ki Maruti. In the Indian Comedy movie, she was featured as Jasleen. For the role, she was nominated for Apsara Award and Popular Awards.

After the movie, she appeared in movies like Sonali Cable, Bank Chor, and Jalebi in the lead characters. Apart from that, she also appeared in the movie like Half Girlfriend and Dobaara: See Your Evil in some camera roles.

Next, the actress will be sharing the screen with the actors like Amitabh Bachchan and Emraan Hashmi in the movie, Chehre.

Currently, the actress is surrounded by the controversy as the actor, Sushant Singh Rajput committed suicide on the 14th of June 2020. Before that, the two actors were in a romantic relationship with each other. Also, the actress happened to the last person to be called by the late actor. The late actor was suffering from depression for a long time.

During the investigation of the suicide, the Mumbai police interrogated the actress for around 9 hours. At the interrogation, she admitted that she left the Rajput’s Carter Road Penthouse after a fight with the late actor. However, they were in touch with each other through the text message.

Also, she mentioned that they were planning to invest in a property together as they planned to get married in November. Besides Rhea, police have also interrogated other Bollywood Personalities like Sanjay Leela Bhansali and Mukesh Chhabra.

The actress, Rhea tweeted requesting for the CBI inquiry to the minister of Home Affairs, Amit Shah in the case of Sushant Rajput. Her tweet stated that she has full faith in the government. However, she requested the home minister to take initiative to CBI inquiry. The tweet didn’t go well with the people and hence she mostly received negative comments.

The actress launched FIR against two unknown Instagram Star. She has been receiving a threat message on Instagram as most of the social media users blamed her for Sushant’s suicide. On the 16th of July 2020, she shared a screenshot of the message that she received on Instagram.

On the message, she was threatened to be raped and murdered. Through her Instagram account, she mentioned that she was called a gold digger, murderer, and even slut-shamed but remain silent. In the same post, she requested the cybercrime to help her and take necessary action.

Rumors were that Rhea Chakraborty and Indian film director, Mahesh Bhatt are having an alleged affair ho is 71 years of age. Mahesh is married to an actress Soni Razdan and has four children Pooja Bhatt, Alia Bhatt, Shaheen Bhatt, Rahul Bhatt. His children are also working in Bollywood industry.

Neither Rhea nor Mahesh has spoken anything about their alleged relationship.

She has black eyes with black hair. She stands at a height of 5 feet and 5 inches and weighs around 50 kg. Her body measurements are 30-36-32 inches.

Media trial of Rhea Chakraborty: The whole world is watching the game of politics and voyeurism in India!