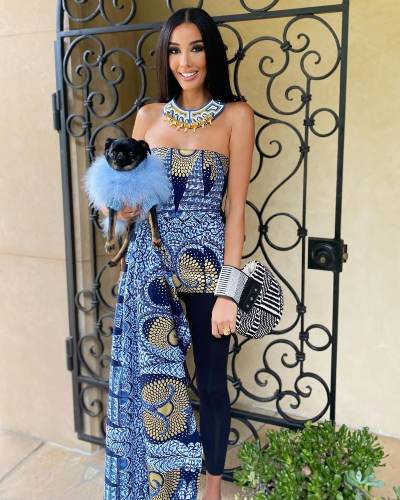 Noella Bergener, the 36-years-old was first introduced on Season 15 of Real Housewives of Orange County as a “friend” of fellow star Brauwyan Windham-Burke.

Bergener is a fashion model who has collaborated in several magazines and brands such as Flirt, Esquire, Chanel, and so on. In 2000, she made her first cover shoot for Flirt back. She has been a huge fan of Bravo before being cast on the show.

In an interview with Entertainment Tonight, she told,

She then joined the show as part of the main cast in season 16 of the franchise alongside her frenemy Dr. Jen Armstrong and the notorious Nicole James. She told Bravo that she is a biracial, liberal, bisexual, bilingual woman.

She introduces as a Wild card in the 5th episode of the show.

What is the age of Noella Bergener?

Noella’s full name is Noella Noel Bergener. As of 2022, she is 36 years old. She was born and raised in California. Last year, her father passed away and she gave a tribute to her father via IG posts.

“My father has been for NBC for 20 years and was a champion of countless charities that benefitted children living with deadly diseases. If I didn’t tell you enough how proud I am to be your daughter when you were here, I hope yu it in heaven. I love you”

Her father’s name was Christopher Nance Weatherman whereas the name of her mother is Nicholette Norma Ortega Nance.

Bergener is a single mother. She has two children; Coco, 7, and James Jr.,2. The reality star has also a cute puppy named RiRi.

Noella married a personal injury lawyer, James Bergener. The couple shared only one child James Jr. whereas her oldest child, Coco is from Bergener’s previous marriage. James was diagnosed with autism.

The couple hooked up for six years after encountering online. In June 2020, the couple walked down the aisle but the pair split within one year citing “irreconcilable differences”. James filed for divorce in August from Puerto Rico.

In the sixth season of RHOC, Noella’s divorce from husband James Bergener has been documented in the show. Similarly, her husband James was accused of owing nearly $6 million worth of tax debt. James runs a law firm called Sweet James.