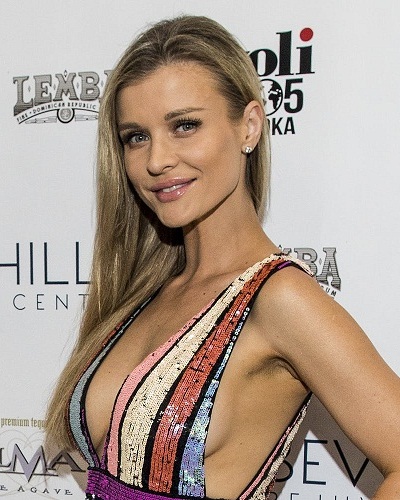 American reality TV star Joanna Krupa from the RHOM show has remarried! She said ‘I do’ to businessman Douglas Nunes in a private ceremony in her native town in Poland. Their wedding was on 4 August 2018 and the couple is happy!

The wedding was at Benedictine Abbey in Krakow, Poland. Joanna, 39 looked stunning as she walked down the aisle. She was in her Sylwia Romaniuk white-colored off-the-shoulder floor-length gown which had a mermaid silhouette.

She had a form-fitting V- necked bodice on the top and there was a flowing veil over her updo which was elegantly done. In her hands, she was carrying a bouquet made of pink and white peonies. Douglas was in a navy-colored suit.

Her sister Marta Andretti who had appeared with model Joanna on the show served as her bridesmaid. She was draped in a transparent sequin gown which was loosely flowing.

Joanna took to Instagram to communicate about her marriage to her fans. She wrote:

“We did it! It was a very private and small family gathering … wish I could have shared it with all the people that I love.”

Joanna also put up details on the Instagram stories. It can be seen that the small wedding group climbed onto a small golf cart after the ceremony and rode laughing and zipping through the streets of Krakow. Joanna wrote on it:

Her new and second husband Douglas Nunes also uploaded on his social media a smiling selfie of the two and captioned it:

For decor, there were white and light pink flowers and burning candles of varying heights. The cake was not exactly a wedding cake. It was white and simply made with a few decorative red stripes, as well as two red hearts.

“No big crazy wedding like I did the first time,”

She had also spoken of children. She said:

“God willing we will start planning this year.”

Joanna and her first marriage

Joanna had met and later dated businessman and nightclub owner Romain Zago for many years. They got engaged in 2010 and tied the knot on 13 June 2013 in Aviara, Carlsbad, CA. In four years the couple called it quits and their divorce was finalized in August 2017. They had no children together.

Her lawyer, Raymond J. Rafool told People at that time:

“Joanna and Romain remain grateful for the years they spent together and wish each other nothing but continued happiness and success,”

“Just another weekend in the Krupa-Nunes household,”

Douglas is the President of the entertainment company which is called 451 media group.
Her costars congratulate her on the social media
Lea Black posted:

“So happy for you. Congratulations.”

Joanna Krupa is a Polish-American model, actress, and animal rights, activist. She is best known for her appearances on the reality television shows; Dancing with the Stars, Top Model, and The Real Housewives of Miami. More Bio…

The Bachelorette’s couple JoJo Fletcher and Jordan Rodgers may get married soon! The two have yet to decide their wedding date but have already “nailed down” everything for the occasion!
Tags : Actress Model reality TV star RHOM