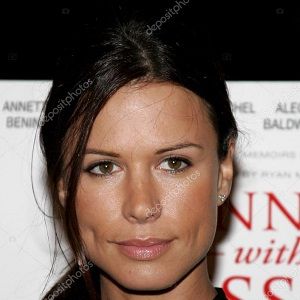 I can't sit still. That's why I'm very difficult in a relationship. Men get jealous of me traveling - they don't understand that just because I disappear on my own doesn't mean I'm going to shag someone else

It's an unusual job. It's like you put on another skin and take it off, and you get back into your own skin, and there is that person. - on acting as a profession

Someone can present you with a choreographed routine, whether it's with swords or with fists, and you can replicate that, but it comes down to attitude. And that can't be taught. - H Magazine.

The prominent actress Rhona Mitra has kept her personal life as a secret and as well as away from social media. But she has dated John Mayer in 2005, Matt Damon in 2003 and Carl Hagmier in 2003. These relationships didn’t last long and they got separated.

Besides this, she hasn’t publicized any information about it as she only wants to focus on her career rather than giving time to her personal affairs.

Who is Rhona Mitra?

Rhona Mitra is an actress, model, singer as well as a songwriter. Her real name is Rhona Natasha Mitra and belongs to British nationality. In 1997-1998, she became famous as the Lara Croft model.

Born on 21st May 1994 in Hampstead, London, England. Rhona is the daughter of Anthony Mitra and Nora Downey. Her ethnicity is Indian-Irish and nationality is British. She has two siblings named Jason Wath Mitra, and Guyana Mitra. Besides this, there is no information regarding her childhood.

Moreover, she had gone to a boarding school and then joined  Roedean School.

Starting her career, she had begun doing live-action model for Lara Croft, the lead character in Eidos Interactive’s Tomb Raider video game series before Angelina Jolie took the role for the two Tomb Raider films in 2001–2003. Then she had acted the romantic interest of Christopher Lambert in Beowulf. She had even played a small role in the film Hollow Man, as a neighbor sexually assaulted by Kevin Bacon’s character. She had a main role in the drama Gideon’s Crossing.

Subsequently, she starred in the roles of Ali G Indahouse, Sweet Home Alabama, Stuck on You, and leading roles in Highwaymen and Spartacus. She had appeared in the lead role of the science fiction/action film Doomsday as Major Eden Sinclair in 2008. The next year, she had gone on to star in Underworld: Rise of the Lycans as Sonja, the daughter of the powerful vampire elder Viktor in 2009. In 2010, she had appeared Major Rachel Dalton on Cinemax’s series Strike Back: Project Vengeance.

Moreover, she had played Dr. Rachel Scott in the first two seasons of Michael Bay’s post-apocalyptic television series, The Last Ship of the year 2014-2015. Then she had played Charlotte in the fourth season of The Strain TV Series in 2017.

Additionally, she has earned the net worth of $10 million. But there is no information about her salary. As so far she hasn’t earned any kind of awards.

There was a rumor that she would play the role As Catwoman In Batman 3.