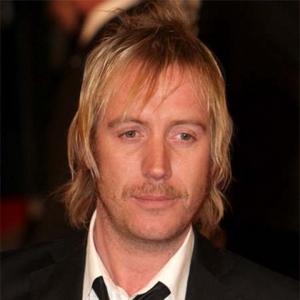 I'm a factory-floor actor. I learn the lines, I get there on time. I don't sit around with other actors and talk about the pain and the magic of acting. I'd rather just go down the pub. That's where the real magic happens

'I work hard and I party hard. When I go to work, I know what I am doing and I do it to the best of my abilities. When I party, I take exactly the same rule book with me

I really don't know why that interests anybody, given that most of the population behaves in exactly the same way.

What is the relationship of Rhys Ifans?

Rhys Ifans dated Anna Friel in 2011 but the relationship didn’t go well so they decided to break up in 2014.

He is living a single life so he is focusing on his career. He has been engaged to Sienna Miller (2007 to 2008). Rhys Ifans has also had romantic affairs with Iris Palmer (2007).

Who is Rhys Ifans?

Rhys Ifans is a Welsh actor and musician. Ifans is well known for his portrayal of characters such as Spike in Notting Hill, Jed Parry in Enduring Love, and Eyeball Paul in Kevin & Perry Go Large.

Likewise, he is also known as a member of the rock groups Super Furry Animals and The Peth.

Rhys was born in Haverfordwest, Pembrokeshire, Wales on July 22, 1967, to parents Eirwyn Evans and Beti Wyn Davies. He has a sibling namely, Llyr Ifans.

He belongs of British nationality and Welsh ethnicity. His birth sign is Cancer. Similarly, his birth name is Rhys Evans.

Talking about his education, firstly, he attended Ysgol Maes Garmon. Then, he attended the Guildhall School of Music and Drama.

Talking about his profession, Rhys Ifans’s early-stage work by Ifans included Hamlet at Theatre Clwyd, A Midsummer Night’s Dream at the Regent’s Park Theatre, and Under Milk Wood and Volpone at the National Theatre.

Rhys also appeared at the Donmar Warehouse in 2003’s Accidental Death of an Anarchist.

In 2006 he returned to the London stage in Michael Grandage’s production of Don Juan in Soho at the Donmar Warehouse. In 2016, he also played Fool alongside Glenda Jackson in Deborah Warner’s production of King Lear, at The Old Vic.

Moreover, he also appeared in many Welsh-language television programs before embarking on his film career, including the comedy show Pobol y Chyff, as well as performing at the National Theatre, London, and the Royal Exchange, Manchester.

During 1990, he also presented Stwnsh (Welsh for “Mash”), an anarchic children’s quiz program. Whereas, he also narrated the children’s animated series Sali Mali for S4C in 2000.

From 2008, he also appeared in “Six Days One June”, one of three episodes of the TV series The Last Word Monologues, written by Hugo Blick and broadcast on BBC Two.

Likewise, he also played a lonely Welsh farmer trying to free himself from a domineering mother.

There is no information regarding the salary of Rhys Ifans. His net worth is around $ 12.5 million as of 2022.

There are no rumors regarding his personal and professional life. Being a private person, he is not involved in any type of controversy currently.

Talking about his body measurements, Rhys Ifans has a height of 6 feet 2 inches. Additionally, he weighs is 75Kg. Rhys’s hair color is blonde and her eye color is blue.