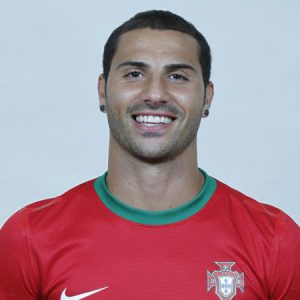 Talking about Ricardo Quaresma’s relationship status, he has been married to Daphne Quaresma. They have two children.

However, the details regarding their marriage and kids are not shared publically.

Who is Ricardo Quaresma?

Ricardo Quaresma is a Portuguese sportsperson who plays football. He plays as a winger for the Portugal national team and Kasimpasa club.

He was born on Sep 26, 1983, in Lisbon, Portugal. His full name is Ricardo Andrade Quaresma Bernardo. His ethnicity is Portuguese-Romanian.

There is no information about his education and siblings.

Ricardo Quaresma started his career at Sporting Clube de Portugal where he played for two years. In 2003, Ricardo started playing for FC Barcelona and started playing in Porto for 4 years in which he became an extraordinary player who became one of the club’s most important players and also he won the best set-piece taker for a year.

In 2008, he signed for the Italian champions Inter Milan for $18.6 million. Ricardo was not successful in this club.  So, he was loaned to Fc Chelsea in 2009 then returned to Inter Milan. Now, he’s currently playing in a Turkish football club named Besiktas in which he has won the league.

Ricardo won Euro 2016 with his country Portugal, he had one of the best games in the whole tournament and scored a goal in a knockout match with Hungary in the competition.

Ricardo at present is involved with a Turkish football club known as Kasımpaşa. He joined them in the year 2019.

In the year 2014, one of his opponent players has used words related to race against him. On his defense, he said that if anything wrong happens in Portugal, it is wrong to blame the gypsies, blacks, or immigrants.

This talented football player has an estimated net worth of $40 million. As per the sources, his salary is around 3.75 million euros.

The average salary which a pro footballer earns is around $860k per year.

Regarding Ricardo Quaresma’s body features, he has dark brown eyes and brown hair.

He has an amazing height of 5 ft 9 inches and his body weight is average.

This player also has tattoos in his body. He inked two teardrops in his face and Psalm91:4 ob the back of his head.

Ricardo Quaresma is active on social media and has a Facebook page with over 3.7m followers.