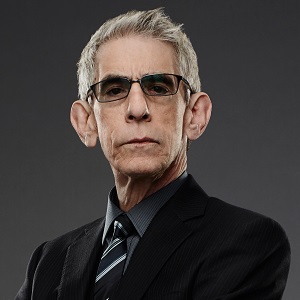 Exercise is the fountain of youth, I believe

In the seventies when I was struggling, I ate the same thing every day at Big Nick's Burger Joint on Broadway and 77th Street. A cottage-cheese omelette with tomatoes, French fries, rye toast, orange juice, and coffee. It was consistently the most satisfying meal I could possibly imagine

It is not impossible to succeed as a social democracy, where business and free enterprise thrive, and not abandon the disenfranchised, poor, sick, and elderly.

In 1981 in Los Angeles he met 31 years old Harlee McBride, a divorce with two daughters, Bree Benton and Jessica. Belzer and Harlee both of them exchanged vows in 1985.

Who is Richard Belzer?

Richard Belzer is an American stand-up comedian, author, and actor. He is best known for his role as John Munch, whom he has characterized as a regular cast member on the NBC police drama series Homicide: Life on the Street and Law & Order: Special Victims Unit.

Richard Belzer was born on August 4, 1944, in Bridgeport, Connecticut. His nationality is American and ethnicity is Ashkenazi Jewish.

He was the son of Frances(mother) and Charles Belzer(father) a tobacco and candy retailer. He grew up in a Jewish family.

Richard has described his mother as usually physically abusive and proclaimed that his comedy career began when trying to make his mother laugh in order to distract her from abusing him and his brother.

After graduating from Fairfield Warde High School, Belzer worked as a reporter for the Bridgeport Post.

Belzer attended Dean College which was then known as Dean Junior College, in Franklin, Massachusetts but was expelled for leading demonstrations for truly stupid causes.

Before becoming a famous stand-up comedian, Richard Belzer had many jobs included teacher, census-taker, jewelry salesman, and a dockworker. In the late 1970s and early 1980s, Belzer became an occasional film actor. He is noted for small roles in Fame, Café Flesh, Night Shift, and Scarface. He also appeared in music videos and songs.

Belzer was featured player on the National Lampoon Radio Hour with co-stars John Belushi, Chevy Chase, Bill Murray, Gilda Radner, and Harold Ramis, a half-hour comedy program Raider on 600 plus U.S. stations from 1973 to 1975. In 1987 he hosted a morning drive program on WJFK-FM in Washington, DC.

He was a regular on The Flash as a news anchor and reporter. He followed that with starring roles on the Baltimore- based Homicide: Life on the Street (1993-1999) and New York-based Law & Order: Special Victims Unit (1999-2013), showing police Detective John Much in both series.

Belzer’s appearance on Trial by Jury, which aired April 15, 2005, made him the third actor ever to play the same character in six different prime-time TV series. Belzer believes there was a conspiracy to assassinate President John F. Kennedy and has written four books discussing conspiracy theories.

Equivalent to rumors, Richard, and his partner have broken up and he has cancer too. He has exchanged vows in an intimate morning ceremony at a secret location.


Richard Belzer has a height of 6 feet 1 inch. His body weight is not known. He has salt-pepper hair and dark brown eyes.