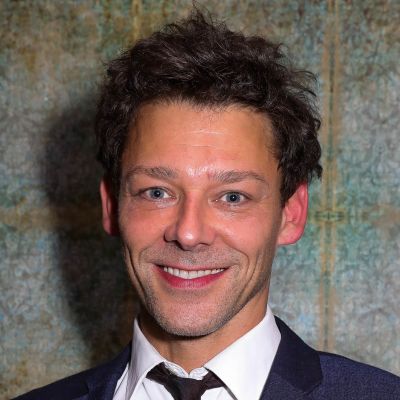 Previously, he was married to an actress, Georgia Mackenzie. The duo first met on the sets of ‘Up Rising’ in 1999.

In August 2004, the couple tied the wedding knot and then welcomed a daughter named Purdy Coyle in 2008. However, their marriage didn’t work out and separated in 2010.

From 2011 to 2017, he was in a relationship with actress Ruth Bradley. They also starred together in the horror sci-fi film Grabbers in 2012.

Who is Richard Coyle?

Richard Coyle is an English actor. He is best known for portraying the lead role of “Father Faustus Blackwood” in the Netflix series, Chilling Adventures of Sabrina, and “Jeff Murdock” in the sitcom Coupling.

Recently, he is filming in an upcoming fantasy film, Fantastic Beasts: The Secrets of Dumbledore which is set to release in April 2022.

Richard was born in Sheffield, the United Kingdom on February 6, 1974. According to his birth date, he is 47 years old. His Sun sign is Pisces.

He is the fourth or second youngest child of his parents. His father was an Irish builder. However, the identity of his parents is unknown. Talking about his academics, he attended the University of York from where he earned a degree in Languages and Philosophy in 1995.

He then joined the prestigious Bristol Old Vic Theatre School, graduating in 1998.

Coyle holds a British nationality and belongs to the Caucasian ethnicity.

Richard made his acting debut through the theatrical film, Jane Eyre in 1996. In 1998, Richard made a television appearance in an episode “A Minor Operation” of Hetty Wainthropp Investigates.

The same year, he also appeared in the films like Macbeth, The Life and Crimes of William Palmer, and What Rats Won’t Do. He was cast in the role of Mr. Coxe in 1999’s BBC version of Wives and Daughters.

In 2000, he got a big break when he was cast in the role of Jeff Murdock in the comedy Coupling. He also starred in the short-lived BBC show, Strange from 2002 to 2003.

Furthermore, his other notable films and television series are,

Richard’s main source of his income is his profession as an actor. He is active in the film industry since 1998. Coyle might have amassed a decent amount of fortune throughout his successful acting career but hasn’t disclosed it in the media.

His net worth, salary, and other earning are still under review.

To date, he hasn’t been part of any sorts of rumors and controversy that create a headline in the media.

The actor has a towering height. He stands at the height of 6 feet and his weight is about 78 kg. Likely, he has curly light brown hair color but often tends to dye his hair in black.

Similarly, he has a blue pair of eyes color.