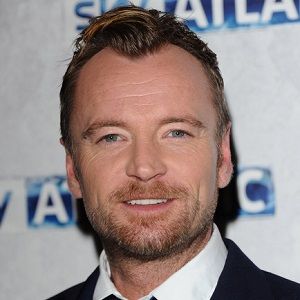 Richard is a married man. He tied the knot with his love Rachel O’Riordan. Rachel is a theatre director. However, there is not any information regarding their marriage date and children. Prior to marriage, this beautiful couple had dated each other and decided to turn their love life into married life. Since their marriage, they have maintained a sound relation between them. Furthermore, there is not any rumor of his extra marital affair. Currently, the couple is spending their married life elegantly.

Who is Richard Dormer?

Richard is an Irish actor and screenwriter. He came in the spotlight after appearing as Beric Dondarrion in HBO series Game of Thrones. Furthermore, he has also played in the hit series as Lewis Conroy in Cinemax’s Hunted. Besides TV, the Game of Thrones actor has also starred in more than a dozen of movies such as 11 Minutes, Good Vibrations, Fortitude, and much more.

Richard was born on November 11, 1969, in Lisburn, Northern Ireland, United Kingdom. he grew up in his hometown. From the beginning of his childhood, he had a keen interest in acting. Concerning in his education, the Fortitude actor attended RADA school of acting in London and graduated from there.

Richard began his career as Rick Tomlinson in the TV show Casualty in 1991. In the next couple of years, he also appeared in the TV shows named Soldier Soldier and The Young Indiana Jones Chronicles. As a movie actor, Richard made his film debut from the 2000 movie A Further Gesture followed by Mapmaker, The Escapist, and Puckoon. Furthermore, he got huge recognition from the movie Good Vibrations in which he has also got the nomination for IFTA best actor award. In 2015, he appeared in the movie 11 Minutes and again stole the limelight.

Additionally, he got the role of Lewis Conroy in the TV series Hunted. Besides this, he is the regular cast of the massive hit HBO series Game of Thrones from 2013. His role as Lord Beric Dondarrion in the series has been loved by many people all around the world. Apart from that, he has also featured as Dan Anderssen in Fortitude.

Being a massive hit star, Richard earns a decent amount of money from his profession. However, there is not any information regarding his salary and net worth.

So far, Richard has won a couple of awards and also got nominations in several categories. In 2004, Richard received the Irish Times Best Actor Award for his performance in Observe the Sons of Ulster Marching Towards the Somme. Good Vibrations has also won the award for the Best Film at the Galway film awards.

So far, there are not any drastic rumors regarding his personal and professional life. Moreover, he has not been dragged into any controversy till date. It seems he has total concentration on his work rather than stuck in trouble.

Richard has a perfect height of 5 ft 10 inches and his weight is unknown. Furthermore, he has gorgeous blue eyes and blonde hair.