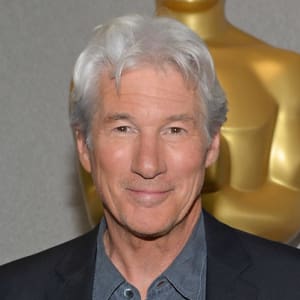 I am very happy. The Tibetans radiate. They literally send out the light. His Holiness [The Dalai Lama] generates love and compassion to every human being. He has committed himself to that. I haven't made that leap yet. I haven't given up self-aspiration. I still love making movies

He was the bridge between old-time Hollywood and Hollywood present. Ed was a master at orchestrating all of the feelings correctly.

Richard Gere has dated many girls.

He was in a relationship with Uma Thurman, but they broke up. He was married to Carey Lowell in 2002 and had a baby named Homer James Jigme Gere in 2000. The relationship didn’t go well so they decided to separate in 2016.

Then, he was in a relationship with Padma Lakshmi, but they broke up.

Currently, Richard got married to Alejandra Silva Friedland in April 2018. They have a child namely Alexander Gere who was born in 2019.

Who is Richard Gere?

Richard is an American actor and humanitarian activist. Similarly, he is well known as Richard Tiffany Gere. Likewise, he starred in the film ‘Yanks’ as Matt Dyson.

Similarly, his career stabilized when he bagged roles in ‘Internal Affairs’ and ‘Pretty Women’, both of which released in 1990.

Richard was born in Philadelphia, Pennsylvania, the United States on August 31, 1949, to parents  Homer George Gere and Doris Ann.

His birth sign is Virgo. Talking about his education, firstly, he attended North Syracuse Central High School. Then, he attended the University of Massachusetts Amherst.

Talking about his profession, during 1971, Richard Gere worked for the Seattle Repertory Theatre and Provincetown Playhouse, where he was cast in ‘Rosencrantz and Guildenstern Are Dead’. In 1975, he made his motion picture debut as ‘Billy’ in the film, ‘Report to the Commissioner’. Similarly, he also starred in ‘Baby Blue Marine’.However, he also earned his first big break in the thriller.

In 1979, he had also established himself as a bankable actor and was the first actor to play the role of a homosexual Holocaust victim in the Broadway Production, ‘Bent’. In the same year, he starred in the film ‘Yanks’ as Matt Dyson. During  1980 brought with it good luck for Gere. Likewise, he depicted his versatility with his role in the romantic drama, ‘An Officer and a Gentleman’, which broke all records at the box-office, in 1982.

Likewise, he regained his status as a leading actor. During 2002, he also played the role of Bill Flynn in one of his greatest films ever, ‘Chicago’. In the same year witnessed two other successful releases, ‘The Mothman Prophecies’ and ‘Unfaithful’. During 2004, he once again stunned audiences with his versatility in the dance-drama, ‘Shall We Dance’ opposite Jennifer Lopez.

Therefore, he also starred in a number of movies including, ‘Nights in Rodanthe’, ‘Amelia’, ‘Hachi: A Dog’s Tale’, ‘Brooklyn’s Finest’ and ‘The Double’. Besides that, ‘Movie 43’, he has also appeared in ‘Cosmos: A Spacetime Odyssey’ (a 2014 American science documentary television series), Henry & Me (), Time Out of Mind, and ‘The Second Best Exotic Marigold Hotel’.

Besides that, he won Golden Camera Awards for Best International Actor for The Hoax (2006).

There is no information regarding his salary. His net worth is around $100 million.

There isn’t any information regarding his professional and personal life. He is far from rumors and controversy.

Talking about his body measurements, Richard Gere has a height of 5 feet 10 inches. Additionally, he weighs is 79Kg. Richard’s hair color is grey and his eye color is dark brown.

The scandalous affair and marriage of Judy Finnigan and Richard Madeley!