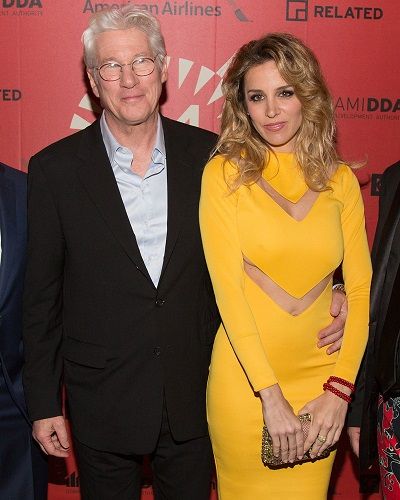 At present, the couple is comfortable and healthy at their property in the city of Pound Ridge. As per sources, the couple wanted their second child to be born at their home so that they could enjoy their privacy.

With all these going on in the world, the family wants to be safe. After the birth of a new family member, their life is filled with joy. The couple announced the news of expecting their second baby in November 2019.

Also read British model Jodie Turner-Smith gave birth to a baby girl! When did she and her husband Joshua Jackson marry?

Richard and Alejandra started dating in the year 2014. They met each other at a hotel that Alejandra was managing in Italy. After that, one of their mutual friends re-introduced the pair, and sparks immediately flew.

Richard was the one who was sending Alejandra flowers until she agreed to date him. He revealed,

“I’m the happiest man in the universe. How could I not be? I’m married to a beautiful woman who is smart, sensitive, committed to helping people, who’s fun, patient, who knows how to forgive, who’s a great cook – and who makes the best salads in the world!”

They walked down the aisle in April 2019. Similarly, they shared their vows in a romantic ceremony on Richard’s ranch outside New York City.

“I feel like I’m in a true fairytale. Without a doubt, I feel like the luckiest woman in the world.”

They have been happily married since then and have a son Alexander who is 14 months now. Also, Alexander was born in February 2018.

Who are Richard Gere’s ex-wives?

Richard Gere has been winning hearts from an early age. Back on 12th December 1991, Richard got married to supermodel Cindy Crawford. In 1993, they were named Sexiest Couple by People Magazine.

Similarly, their married failed after two years as the age gap of 17 years played a big part to blow their marriage. On 1st December 1995, they got divorced.

After that, he dated actress Carey Lowell with whom he gave birth to a son Homer James Jigme Gere on 6th February 2000.

Likewise, after two years, they got married on 9th November 2002 in a private ceremony at their home in New York. After ten years, Carey filed for divorce.

Their split was highly publicized and took over three years to settle in court and the divorce was finalized on 18th October 2016.

Richard is an American actor and humanitarian activist. Similarly, he is well known as Richard Tiffany Gere. Likewise, he starred in the film ‘Yanks’ as Matt Dyson. Similarly, his career stabilized when he bagged roles in ‘Internal Affairs’ and ‘Pretty Women’, both of which were released in 1990. Read more bio…

Meghan Markle and her first marriage to Trevor Engelson! Why did the couple divorce?
Tags : Actor Yanks