Richard McVey is an American entrepreneur and philanthropist. He is married to Lara Spencer and is the father of three daughters.

Richard McVey is a married man. He exchanged his vows with a journalist Lara Spencer on 1 September 2018 in Vail, Colorado in an outdoor ceremony.

Lara is McVey’s second wife. The name of his first wife is not known. He has three daughters from his first marriage.

Previously, his wife, Spencer was also married to David Haffenrefer in 2000 September. Later, they got divorced in 2015 June. Lara has two children Kate and Duff with David. 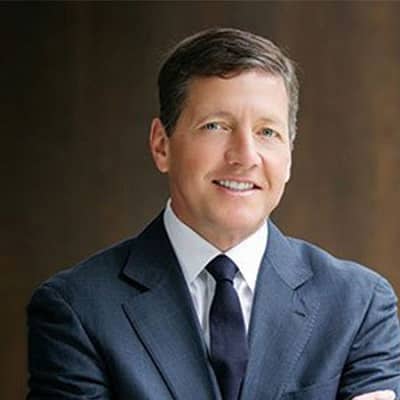 Who is Richard McVey?

Richard McVey is an American entrepreneur and philanthropist. He is best known as chief executive officer and chairman of MarketAxess.

This businessman was born in 1959 in Ohio, the United States with the birth name Richard Mitchell McVey. Details about his father, mother, and siblings are not yet disclosed.

His father used to run an oil company and was a stock investor. As per academics, he graduated with a Bachelor’s degree in finance from Ohio University.

Later, in 1983, he graduated with an MBA from the Kelley School of Business from Indiana University. McVey belongs to Scottish descent.

Earlier, Richard McVey began his career as a trader in finance at a bank of Cleveland. He also worked with Chicago Merchantile which gave him a more diversified career experience.

In 1991, he joined JP Morgan to run the North America Futures and Options Business. There he was promoted as Managing Director.

In April 2000, he decided to put the knowledge that he gained through the years to good use. He developed and launched an electronic trading platform ‘MarketAxess‘.

Since then, he is serving as chairman and chief executive officer of MarketAxess. Later, McVey led the company’s stock market launch in 2014 November.

He gained huge popularity and respect for his knowledge and innovation in making the trading process easy through electronic processes.

In 2012, Richard was honored with the “Ernst & Young National Entrepreneur of the Year” award for his contribution to financial services. He is also named to Institutional Investor’s Tech 50 nine times.

Richard McVey: Salary and Net Worth

As the Chief Executive Officer and Chairman of MarketAxess, he receives a handsome salary of $3,222,710.

Meanwhile, according to some sources, his estimated net worth of Richard is $480 million as of 2022.

There is no rumor and scandal about this entrepreneur. He is doing great in his professional and personal life.

He loves to spend quality time with his family rather than on social media.