Richard Rawlings is the owner of GasMonkeyGarage. Richard is married thrice and can be married for the fourth time with his current fiance.

Richard Rawlings is engaged in August 2019. He exchanged rings with a girl named Katerina Deason. He proposed to her in Quintana Roo, Mexico and she said yes.

They were holidaying at Be Tulum resort in Mexico where he popped her up with the proposal. The resort was decorated with a bed of sandy rose petals.

The couple has not revealed their marriage and wedding details yet.

He has been married thrice in his life. In 1993, young and handsome attracted a lot of ladies’ attention. And one of them was Karen K. Grames. They married in 1993, but it didn’t work out pretty long. In 1994, they separated legally.

His second marriage was with Suzanne Marie Mergele. They tied the knot in 1999 to the beautiful city of Las Vegas in Nevada. The couple enjoyed each other’s company for a decade until things started falling apart.

In 2009, their divorce was finalized. But the marriage didn’t destroy the immense love between them. This led to their re-marriage in 2015. The ceremony took place in Cabo, Mexico.

However, in 2019, this couple again separated with a divorce. 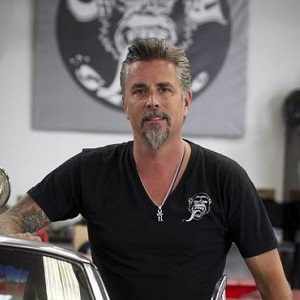 I could've gone to Harvard twice, the money I lost on cars

Getting a TV show and getting on to Discovery was the main goal when I started the company in 2004.

Who is Richard Rawlings?

Richard Rawlings is an entrepreneur, auto mechanic, and media personality.

Multi-talented Richard is also a race car driver. He is also the owner of Gas Monkey Garage.

Presently, he is the star of “Fast N’ Loud”, which is a reality-styled Discovery Channel TV show.

Richard was born in the city of Fort Worth in the state of Texas. Born on March 30, 1969. He possesses an American personality and his ethnicity is Caucasian.

During his early childhood, he used to go to different car shows with his father. He has a sister named Daphne Rawlings Kaminski and a brother named John Rawlings.

He was passionate about cars from a very young age. Furthermore, he began buying cars since he was 14. He was into building cars from his early days in his childhood.

As per his education, he attended Eastern Hills High School. He completed his high school from there.

Richard Rawlings pursues multiple careers. He is a reality TV star, car mechanic, race driver, and a media personality. Racer Richard grew up with a passion for buying and building cars. Consequently, this influenced his racing career.

He also claims to have worked as a law enforcement officer, firefighter, and paramedic. In 1999, he founded Lincoln Press. It was a print/advertising company.

Afterward, in 2002, he founded a car building garage named, “Gas Monkey Garage”. He worked hard as an entrepreneur.

Additionally, in 2013, he established an American restaurant and live music bar, “Gas Monkey Bar N’ Grill”. He also started this restaurant in other locations. After a year, in 2014, he started a new business dedicated to living music lovers named, “Gas Monkey Live”.

In May 2007, Richard Rawlings and co-pilot Dennis Collins broke the Cannonball Run time from New York to Los Angeles of 32 hours and 51 minutes. Their final time was 31 hours and 59 minutes. They were the only pair to defeat the 1975 mark in a Ferrari Dino.

On 12 May 2015, he published his first autobiography called Fast N’ Loud: Blood, Sweat, and Beers.

Various rumors regarding his show have come out through the years. Some people believe the content of his show is vague. Also, there was this controversy that believed his co-mate, Aaron Kaufman in Fast N’ Loud show left because of him.

Richard Rawlings has a height of 6 feet 1 inch. His body weighs 86kg. He has brown eyes and salt-pepper hair.

Richard Rawlings Married His Wife Twice. Any sign of divorce this time?