Richard Simmons is a semi-retired American fitness instructor, actor, and video producer. He is known for his eccentric, flamboyant, and energetic personality. He is possibly single. 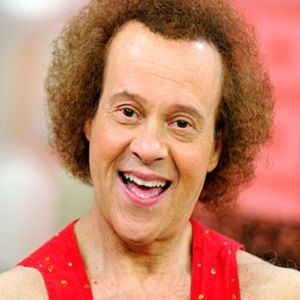 When I go to bed at night, I ask God to give me another day

Number one, like yourself. Number two, you have to eat healthy. And number three, you've got to squeeze your buns. That's my formula

I spent my childhood eating. The only exercise I got was trying to twist off the cap of a jar of mayonnaise

No one is perfect... absolutely no one. Like precious stones, we have a few flaws, but why focus on that? Focus on what you like about yourself, and that will bring you happiness and peace.

The sexual orientation of Richards Simmons is a controversy. This 70-year-old weight saint remains unmarried to this day and living a single life at his residence in Beverly Hills, California.

Who is Richard Simmons?

Richard Simmons is a resident of Beverly Hills, California. He is well known as a fitness instructor, actor, and comedian.

He has an eccentric, flamboyant, and energetic personality and promotes the weight-loss program through his line of aerobics videos which he liked to call sweating to the oldies.

Richard continued to promote health and exercise throughout his career. In 2008 he became politically active in favor of a bill No Child Left Behind Act which mandates physical education in public schools to be non-competitive.

He has not been caught on the public since February 2014 and in late 2016 he closed his gym raising suspicion among his well-wishers and those who are concerned about him regarding his well-being. However, Simmons and those who are close to him have confirmed that he is doing just fine and enjoying his time alone.

Milton Teagle Simmons was born on July 12, 1948, in New Orleans, Louisiana. He was raised in the french quarter of New Orleans. His father’s name is Leonard Douglas Simmons and his mother’s name is Shirley May.

Leonard and Shirley both worked in the show business. He is the younger of the two children of  Leonard and had a brother named Leonard Jr.

He was obese at the very early age of 5. Born and raised in New Orleans, he started selling pralines at Leah’s when he was still a child. His ethnicity is Caucasian.

He was obese from his early childhood to adolescence. He weighed 83 kilos at the age of 15 and reached up to 122 kilos during his adolescence. Richard attended the Cor Jesu High School which is now known by the name of Brother Martin High School.

He graduated from Florida State University with a degree in Arts. When he was young he thought about being a priest. He has appeared in Fellini’s Satyricon (1968) and The Clowns (1970) as freak show characters.

Richard Simmons started his professional life as a host for a restaurant called Derek’s after he moved to Los Angeles in the 1970s. Simmons started his own exercise studio called The Anatomy Asylum that focused on the right diet and proper exercise in a supportive environment.

The studio renamed Slimmons and continued to operate in Beverly Hills and throughout the week Simmons appeared on motivational classes and aerobics. Simmons also runs his own membership-based website and has numerous official pages on social media like Facebook, Twitter, My Space, and Youtube.

Simmons has also appeared on numerous TV shows and in movies including TV shows like Whose Line is it Anyways?, Saturday Night Live, The Larry Sanders Show.

He has also penned the books and is an author of nine books to date including, “Never Say Diet”, Richard released his autobiography, “Still Hungry-After All These Years,” etc.

Simmons also hosted for Sirius Satellite Radio Channel 102 in an exercise program called Lighten Up With Richard Simmons. He suddenly withdrew from his public appearances in 2014 and closed his gym in 2016. Moreover, he is also known as the nation’s most revered fitness expert who encourages people to make their fitness.

Richard Simmons has not received any formal awards to date. However, he is often honored via guest appearances on various TV shows.

He appeared as a guest in shows like Price is Right, Hollywood Squares, Figure It Out, and many other shows.

His salary detail is unknown. He has an estimated net worth of $20 million.

He has been claimed by Bruce Headrick who is a gay hustler that Simmons often reached him in the ’80s.

Richard Simmons is 5 foot 6.5 inches tall and weighs 61 kilos. His hair color is light brown. His eye is dark brown in color.

He has 38 inches of chest, 31 inches waist, and his biceps are 12 inches. His dress size and shoe size are unknown.

‘Victim of Black Magic’, ‘Imprisoned and controlled by his housekeeper Teresa Reveles’: Richard Simmons’ health, mysterious life, his loneliness, and the control of his life: Read on it here!

Richard Simmons seen after Disappearing for 3 years! Speaks Out After Health Scare: ‘I’m Not Missing, Just a Little Under the Weather’