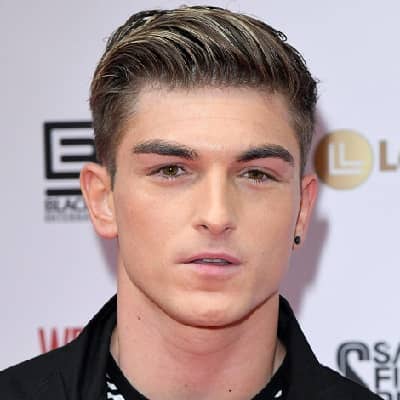 Richard Wisker is living his single life as of now. In 2011, he posted a Tweet mentioning that he is single and isn’t involved in any relationship.

However, there are various speculations that he dated actresses Amy Leigh Hickman and Dani Harmer in the past. He has also personally never addressed the rumors.

As Richard has never seen dating anyone officially, there were various rumors spread on his sexuality being gay.

Who is Richard Wisker?

Richard Wisker is an English actor, singer, dancer, and entrepreneur.

As an actor, he has appeared in movies like Tracy Beaker Returns, Flatmates, and Supernova. He is also managed by Opaque Management and Bold Management.

Richard was born on 1 February 1995 in Dagenham, London, England.

Despite being a well-known actor, his father’s and mother’s names are unknown. However, he seems to be close with his parents and also often post about them. He wished his father on the auspicious day of father’s day via his tweet.

He has maintained a low profile and the details regarding his siblings are also unmentioned.

Richard completed his schooling at Wanstead High School between 2006 and 2011.

Richard debuted on TV playing Mason Kemble on the 2008 British police drama The Bill. And in 2010, he was starred in The Sarah Jane Adventures. The actor gained fame after appearing as Liam O’Donovan in the CBBC drama Tracy Beaker Returns in 2010. He reprised the role again in 2012.

Likely, from 2013 to 2015, he portrays on the TV series ‘Dani’s Castle’. Richard as Rich and Diego and his characters were critically praised for his performances.

Richard debuted in the movie from Friday Download: The Movie which was released as Up All Night. After that, he played the main role of Declan on the TV sitcom Millie Inbetween, and as Dean Harding in Supernova in 2018. From 2019, he is playing the main role in Flatmates.

Richard also has built his career in music. In 2012, he released his first solo song Broken. The next year, he released his second single, Taste Like Nandos. Likewise, his covers of songs like Holla At Me and Man in The Mirror have been quite popular.

Richard receives a good earning from his career but his net worth is estimated at around $1 Million.

Similarly, the actor also earned from her merchandise. He sells various ranges of t-shirt and hoodies with his name sticker. The T-shirt cost ranges from £19.99 and the hoodies from £25.00.

The star knocked over a female pedestrian while driving on Ballam Street, London E 13 on Dec 2, 2015. And he kept driving instead of helping her. After it, Richard received various controversies.

Followingly, he even pleaded guilty to the charges and received five points off his driving license with an additional fine of 685 pounds on 2nd March 2016.

Richard stands tall at a height of 5 feet and 9 inches with a body mass of 62 kg.

Talking about his appearance, he has light brown colored hair with hazel green eyes. Richard seems to be a great fan of tattoos and has a lot of them in his body.

You may also read the bio of Callan Potter, Matt Cornett, Joshua Bassett, and Spencer Garrett.