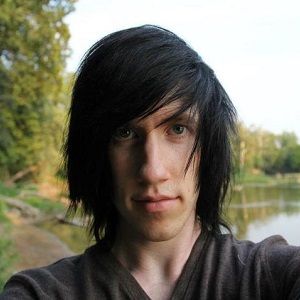 What is the relationship of Richie Giese?

The 25-year-old American singer, Richie is an unmarried man. Previously, he was in a relationship with Alexis Shelby Meyers in 2016. However, the pair broke up soon. Just after separating with Alexis, he was linked up with Ayalla Karina. Moreover, they also couldn’t carry their relationship for so long and split up after a couple of months.

Additionally, Richie began dating Jaclyn Glenn in 2016. The couple carried their relationship for a year and broke up in 2017. Currently, Richie is enjoying his single life and living elegantly.

Who is Richie Giese?

Richie Giese popularly known as Social Repose is an American singer and YouTuber. He formed his project ‘Social Repose’ in 2011. Later, he rose to fame after releasing the ‘Island of Yours’ and ‘Filthy Pride’. Furthermore, he has also launched various covers of famous singers such as Nicki Minaj, Bring Me The Horizon, and few more.

Richie was born on February 9, 1992, in Cabin John, MD, United States. Talking about his nationality, he is American and his ethnicity is unknown. There is not any information regarding his early life and childhood. Concerning his education, Richie completed his graduation in film and media arts at American University. Later, he rose to fame after releasing the ‘Island of Yours’ and ‘Filthy Pride’.

Richie began his music career with his project Social Repose, in 2011. In the same year, he launched his debut album Paradise and also released the music video ‘Helium House’ from the album. Just after a year, he landed another album titled ‘The Modern Age’. Additionally, Richie also runs a YouTube channel named Social Repose in which he has earned over 946k subscribers.

Furthermore, he has also launched various covers of famous singers such as Nicki Minaj, Bring Me The Horizon, and Adele. Some of his popular YouTube videos are Send this Videos to Your Enemies, One Guy, 13 Voices, Hello, and a few more. Recently, Richie has also released a couple of albums such as Empress, Yalta, and Covers.

Being a famous YouTube singer, he earns a decent amount of money from his profession. However, his net worth is $1 million as of 2022.

Is Richie Giese involved in any rumors and controversies?

So far, there are not any drastic rumors regarding his personal and professional life. Moreover, he has never faced any controversy in his career to date. It seems he has total focus on his career rather than being stuck in any controversy.